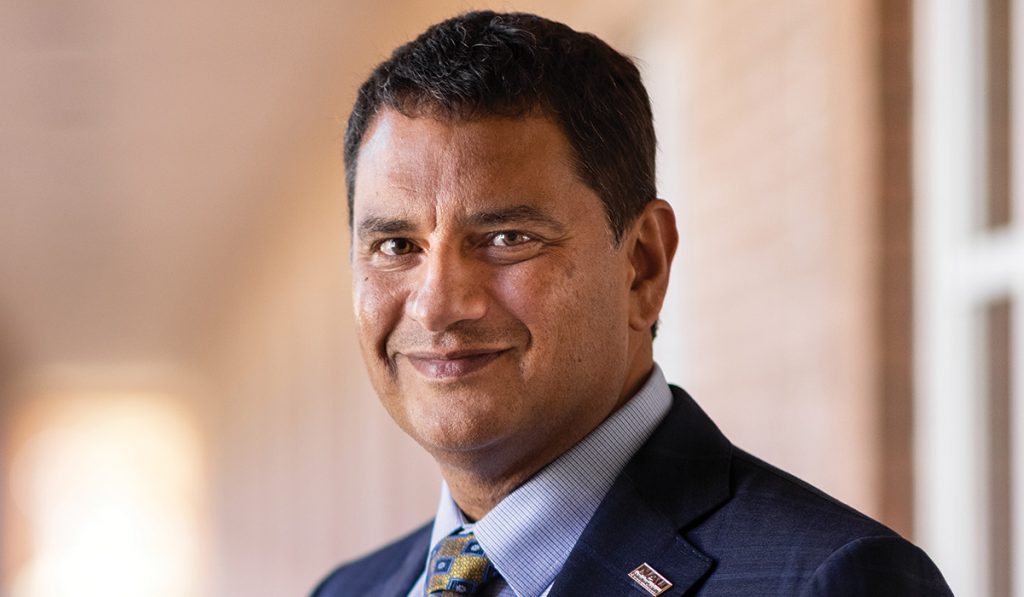 It has been a busy first year for President José Luis Cruz Rivera, who began his tenure as the 17th president of Northern Arizona University on June 14, 2021. At that time, NAU was facing a number of challenges far beyond a transition in leadership. “We needed to bring students and faculty safely back during COVID, while also addressing issues of trust, a desire for consultative leadership, a call to re-center NAU’s student-first values and the need to articulate a distinct and differentiated value proposition,” Cruz Rivera says. As a leader who deeply values listening and learning, Cruz Rivera committed to “hit the ground learning” and spent the months leading up to his start date meeting with stakeholders at NAU, in the Flagstaff community and across the State of Arizona — a wide presence that includes several locations in the Phoenix area, among them the beautiful Phoenix Bioscience Core.

Cruz Rivera wasted no time in leading with complete transparency by ensuring the community was involved from its six Phoenix campuses to its many locations across the state. He engaged any and all who were willing to share their NAU story. This involved open office hours, one-on-one and group conversations, listening sessions and meetings, hundreds of emails and thousands of survey responses, all providing a compelling glimpse into NAU, its history and its potential for the future. “Our community didn’t just want to hear that change was coming — they wanted to see the change and be a part of the change,” said Cruz Rivera.

Engaging faculty, staff and students every step of the way, Cruz Rivera quickly earned the trust of the community, which led to a campus-wide engagement process to create a new strategic roadmap, organizing the work of a new NAU charter for the next three years. “In order to fulfill our aspirations to be a national leader in equitable postsecondary value and to serve as an engine of opportunity for students and communities throughout Arizona and beyond, we needed clear, strategic priorities to serve as the basis for action, not just words on a paper,” Cruz Rivera says. “And we needed to have buy-in and participation from every member of our team to ensure we deliver on our promise.”

Opportunity and equitable postsecondary value have been the north star of the president’s life in higher education. “I have spent my life engaged in the work of eradicating disparities in educational access and attainment, seeking to facilitate and drive the generational change a higher education can provide,” says Cruz Rivera. “I’ve realized it in my own life, I’ve seen it in the lives of my children, and I’ve had the privilege of helping countless students — as a faculty member and administrator — write new futures for themselves as a result of postsecondary education.”

Cruz Rivera is a living value statement who encourages his leadership team to think boldly and boundlessly. In less than a year on the job, he has spearheaded the launch of two transformative programs that embody the aspirations and values of the new charter. The first is Access2Excellence, which assures hard-working, Arizona-resident students with a household income of less than $65,000 and who qualify for admission to NAU can attend NAU tuition-free thanks to adjustments to financial aid and scholarship awards. With the median household income in Phoenix sitting at $60,914 as of 2020, this program is poised to positively impact many in the direct community.

The second initiative is a new pilot program that aligns admission standards with Arizona high school graduation requirements, providing a clear pathway to college for thousands of qualified Arizona students and removing longstanding roadblocks caused by lack of high school course availability for many rural communities. This forward-thinking innovation has already secured $81 million in new public and private investments in the university to broaden participation, improve completion and strengthen post-college outcomes — powering the attainment of future Lumberjacks.

The president’s work extends to the national stage in higher education, where he draws on his experience as a first-generation student and long-time administrator in Hispanic-Serving Institutions (HSIs) to advocate for access to high-quality education for all students. A leading national advocate for policies to expand opportunities and improve educational outcomes for all students — especially those who have historically been underserved — Cruz Rivera is a frequent keynote speaker and writer on higher education issues. In March, Cruz Rivera testified in front of a U.S. House subcommittee, in which he discussed five steps the U.S. government can take to make higher education more equitable for all Americans, especially historically underrepresented groups. “Investing in HSIs can help us expand the number of students who can receive the equitable access and support services they need to complete quality, affordable credentials — offering them increased economic mobility and providing the nation with broader economic prosperity,” Cruz Rivera says.

In addition to testifying several times before the U.S. Congress, Rivera Cruz’s work has been covered by many media outlets, including The Chronicle of Higher Education, the New York Times, the Washington Post, and Univision. He chairs the board of directors of The Education Trust and serves on the board of the Data Quality Campaign, the American Association of State Colleges and Universities (AASCU) Board of Directors, the Western Interstate Commission for Higher Education (WICHE) and the steering committee of the Presidents’ Alliance on Higher Education and Immigration.

With an exceptional 122-year history of NAU student success, Cruz Rivera is using his leadership to build upon the strength of the institution to become the transformative higher education model for the City of Phoenix, the State of Arizona and beyond.

Did You Know: NAU has increased its investment in Hispanic-Serving Institutions, part of its efforts to create a transformative model for access in Phoenix — where the largest population group is Hispanic/Latino — and across the state.