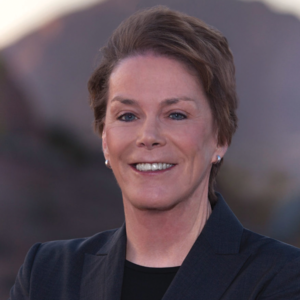 When Linda Matthews joined BioCare, Inc., a leading national specialty distributor of life-saving therapies, in 2001, the Tempe-based company was a $17-million organization, struggling to grow. A determined leader, Matthews made it her mission to see BioCare succeed, and in her first year the company changed course and became profitable. Today, with Matthews as BioCare’s president, the organization has grown its sales by more than 1,500% and is competing with multibillion-dollar corporations across the country.

Matthews’ tenacity and drive came into play long before she became a pharmaceutical trailblazer. Prior to her corporate career, Matthews competed as a guard in the Women’s Professional Basketball League, having been inducted into the Women’s Basketball Hall of Fame in 2017. Years of playing competitive sports helped her develop a strong mindset regarding failure and perseverance, one that she’s carried throughout her professional and personal life.

After graduate school, Matthews began her career consulting in the healthcare space. Working in healthcare was important to her from both a personal and professional perspective. Growing up, her sister was diagnosed with Hodgkin’s lymphoma, which led Matthews to spend a considerable amount of time in a children’s hospital, supporting her sister as she underwent treatment. Years later, this would gravitate her toward working with children’s hospitals on a professional level. “All of the people who work there make a difference in the lives of not just the children, but their families, too,” says Matthews.

Fast forward to her start at BioCare, where Matthews’ first order of business was to turn the company around and get it on sound financial footing. She knew she wanted to begin by building a strong team that could help push the company to new heights, so she started assembling a top-notch team — one she takes pride in to this day.

“Success is a function of the people you work with every day, and we are people who care,” she continues.

In addition to building a talented team, Matthews leaned into her passion for exceptional patient care by optimizing their care delivery systems and increasing access to life-saving treatments. The company’s size, unique business model and flexible mindset has allowed it to operate in a highly agile way, with customizable solutions for its partners.

Matthews knew the team and vision were only part of the success equation and that being a supportive and inspiring leader was also key to get the company headed in the right direction. Her focus on this type of leadership stems from her experience with supportive leaders in the past, and how much more motivated she felt when she had the right leadership behind her. For instance, while playing in the Women’s Professional Basketball League, one coach made this lesson abundantly clear. Matthews and her team were heading to Los Angeles to compete against Olympian and superstar Ann Meyers. On the way to the game, her coach spoke to Matthews about how much he believed in her and how he wouldn’t trade her for any other player. Subsequently, she had one of the best games of her career. When it came to building and leading her own teams in the future, she recalled this moment and knew this was the kind of leader she would be.

While Matthews’ leadership style is very collaborative, she feels communication is one of her key assets. Early in her career, one project found her working primarily with Quality Assurance staff. She discovered this team needed a step-by-step sequential approach to guidance. It wasn’t until another colleague recommended she adjust her communication style that the project began to succeed. Matthews learned that understanding the most effective way to communicate with different staff is the key to great leadership.

“Managing a business is very much like managing a family,” Matthews says. “You need to be fair, but that doesn’t mean everyone wants to be treated the same.”

It was important to Matthews that BioCare’s work reflected the passion for the patient experience that she and her team valued, so she channeled that energy into developing a high-touch model of care. Thanks to the unique nationwide distribution network Matthews went on to build, BioCare can now guarantee delivery anywhere in the nation in four to six hours, from a customer’s initial request to the moment the treatment reaches the patient. It offers on-demand service and provides access to live BioCare representatives 24/7. Prioritization of the patient experience has allowed the company to build a trusted track record in supporting unmet and urgent needs across ultra-rare, rare and orphan diseases.

Linda Matthews’ drive and determination continues to propel BioCare to new heights. Her integrity, perseverance and commitment to leading with transparency have grown the company exponentially and made BioCare one of Arizona’s top places to work.

An Emory University alumna, Linda Matthews recalls that she wasn’t initially accepted into the university. While she had her heart set on attending Emory’s business program, she was surprised to see her application had been declined. Her tenaciousness came through when she called the dean of Admissions directly about her acceptance letter, stating that it certainly must have been a mistake. It was this determination that granted her an interview and, inevitably, a spot in the university’s upcoming class.

Did You Know: BioCare was named a 2021 Top Workplace by AZ Central. The top workplaces list identifies organizations that have created exceptional places to work and is based solely on employee feedback. Among just 110 companies, BioCare has been declared one of Arizona’s top organizations that make the state a better place to work through quality work environments.