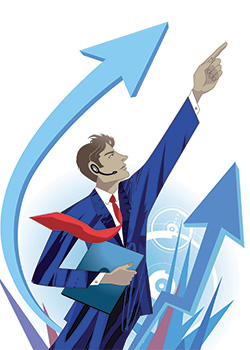 Though there are many reasons for introducing new corporate leadership — a reinvigoration of a business’s long-term vision, a retirement or, worst case, an unexpected illness or death — the steps required for a healthy, successful succession are almost carved in stone and, best case, the result of vision, development and preparedness.

“Succession is a process, not an event,” says Leslie Dashew, president of The Human Side of Enterprise and a partner in Aspen Family Business Group, who has spent 35 years in business and wealth consultation in Scottsdale. “One essential part of the process is creating a culture that focuses on growing competencies of individuals and the organization as a whole.”

Her point is echoed by John Lovato, whose experience encompasses many years as a senior executive officer of a Fortune 500 company in manufacturing services. Planning for a CEO’s departure is not merely about forecasting rainy days, the heavy hammer of calamity, dramatic market shifts or the inevitable retirement of aging leaders; it’s just common sense. “Succession planning falls under the umbrella of human development,” says Lovato, whose 21 years at one company bore witness to its spectacular growth, from 1,500 employees stateside to more than 80,000 globally. “It requires an investment in training, clear communication on expectation-setting and performance feedback, and an ability to characterize and re-characterize your company’s ambition, aspiration and development needs on a regular basis.”

Annual from-the-ground-up analysis, employee reviews, measurement descriptions, upward mobility, employee goals and training requirements are fundamental ways for company leadership to connect with its employees, and also to assess its “bench strength” — in-house high-potential candidates, already grooming for rank ascension. Most publicly traded companies are mindful of such requirements, perhaps because of their shareholder accountability, according to Dashew, while too many family-owned businesses are so “focused on the pressing issues of today and not on the future,” that succession planning is “sometimes left to luck.”

Douglas Griffen, founder and director of Advanced Strategy Center in Scottsdale, believes a CEO who does not prepare for change is, essentially, an agent of decay. Says Griffen, “Successful companies will always have someone ‘on deck.’ You can’t just deal with [succession] when it happens. And CEOs need to be open to change and know when to ‘let go.’”

Succession isn’t just about changing the name on an office door, says Dashew; it’s about the progression of ownership, leadership, knowledge, relationships and authority. She also emphasizes the importance of developing a shared vision of the future among stockholders and stakeholders, and anticipating leadership and employee competencies that will be required in the future to move toward that fresh vision. “This is not the time, necessarily, to reflect on what has worked in the past,” she says. “You don’t want a ‘clone’ leader. You want a new leader to go into a new future.”

Griffen has high praise for the 2011 CEO transition at Avnet, particularly for the company’s warmth and transparency in promoting Rick Hamada as 34-year veteran Roy Vallee transitioned to the company’s board of directors. In development for more than a year, the Avnet transition was an in-house proposition executed with grace during a time of company growth. Hamada and Vallee are men of complementary vision, according to Griffen, and the shift has been, he says, “an excellent example” of succession planning done right.

Prisma Graphic founder and CEO Bob Anderson sought “strong communication, clear vision and a powerful skill set” as he spent two years preparing for an in-company transition that allows him to spend more time with clients and less with managing “an ever-changing marketplace.” Anderson worked closely with successor Simon Beltran, who took the desk with a 100-day roadmap and “the freedom to do things a little differently.” The shift inside Prisma reinvigorated the company with “a fresh outlook,” says Beltran. “I believe success comes from knowing where you want to go, rather than focusing on where you’ve been.”

Navran, who now focuses on contract relations, sales, marketing, medical services and governmental affairs, says the transition was handled with grace and ease largely because “BCBSAZ has provided opportunities for executives to learn all aspects of the business over a reasonable time horizon with the advice and counsel of predecessors.” Working closely with Gibson, establishing a potent give-and-take as they now effectively manage the other’s “shop,” has yielded, says Navran, “improved efficiencies and communication between divisions. This has definitely contributed to our long-term strength and success.”

According to Lovato, the “culture of collaboration” as demonstrated in these three Arizona succession stories is critical to a company’s healthy and successful evolution. “It’s about empowerment, accountability and respect,” he says. “It’s a never-ending process of refinement and commitment.”

With vision, preparation and collaboration, changing times need not be fearsome or seismic shifts but, rather, a natural movement toward greater achievement. “A lot of times, this is exactly what a company needs most,” says Lovato. “It can be truly invigorating.”