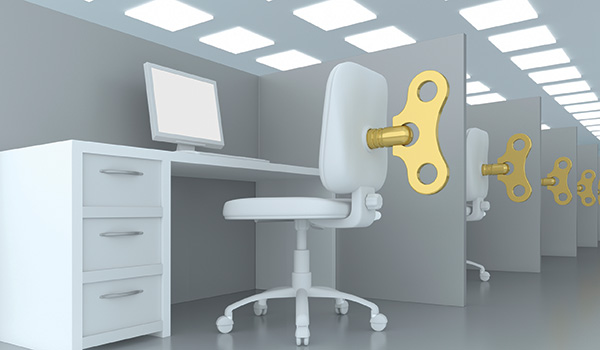 Over the past few years, most front-line managers have been forced to accomplish more with less — less in resources, less time, fewer costs. While a lot of companies have succeeded in maintaining or increasing their bottom line (despite unfavorable economic conditions), they’re also beginning to see the unfortunate side effects of that success.

To wit: Employee engagement levels have plummeted to their lowest level in 15 years, according to a national study by Hewitt Associates. That represents a consistent decline over the past five years, mostly due to the fact employees feel they have little or no stake in the company’s overall direction, regardless of how much additional responsibility they’ve agreed to take on since the recession began.

There is hope, however, for managers who need to make do with limited resources. The study found organizations that have maintained high levels of employee engagement throughout the downturn generated 19 percent higher revenues than their competitors. And the key to effecting that employee engagement, in many cases, is a matter of making employees feel empowered, as if they have a certain degree of autonomy.

Management and policy strategies that lead to a “yes” response to these questions are proven to boost the level of engagement, which — in turn — contributes to increased employee loyalty, morale, productivity and revenues.

At the same time, managers may need to consider how their hiring decisions may be affecting the overall dynamic of the department, and — more importantly — what they can do to compensate for poor hiring decisions they’ve made in the past.

Mike Toney, CEO and founder of Phoenix-based Conquest Training Systems, Inc., has spent the bulk of his career assessing local and national companies’ sales performance, offering expert guidance on how to pinpoint (and capitalize on) hidden opportunities. He recalls the story of a mid-sized company that became aware of some of its performance problems as a result of the recession. “Good economies hide a lot of bad behavior,” Toney explains.

After monitoring the company’s day-to-day operations, Toney recognized the company had two types of salespeople — “Victims” (frequently referred to in sales circles as “average order takers”) and “Producers” (i.e., top performers). The Victims, who represented more than half of the sales force, blamed the economy, the leads and the company for their inability to generate new business. The Producers, who represented roughly 45 percent of the sales force, were wholly committed to maintaining high closing rates no matter what (to the extent they were willing to take risks and learn new strategies in order to succeed). This example is indicative of something a lot of companies are experiencing right now: the downside of poor hiring decisions made before the economic downturn began.

According to Toney, one way managers can inspire the whole team without straining the budget is to offer non-cash incentives that are personalized for each team member. Cash incentives are just a means to an end — family, travel, security, etc. If travel is important to an individual; Toney suggests offering him/her a trip in return for meeting a long-term goal. If family is important, offer some time off in return for reaching an agreed-upon benchmark. The key: Make sure the incentive is offered with the employee in mind.

It’s also crucial for today’s managers to be proactive when it comes to recruiting. One tactic from which a lot of companies have benefited is the use of an employee profile. Managers utilize a number of criteria (e.g., surveys, metrics, annual reviews) to develop a list of skills and personality traits their highest performers have in common. This way, companies can make hiring decisions based on who provides the “best fit” for their department rather than who has the most experience.

In terms of motivating long-term employees, recent research proves workers crave more flexibility in their schedule so they can achieve a healthy work/life balance. The value of this work force intangible is recognized in the Alfred P. Sloan Award for Business Excellence in Workplace Flexibility, which considers employers of all sizes, in both public and private sectors, whether for-profit or not-for-profit. The Arizona Foundation for Legal Services & Education has won the award two years in a row, in recognition of several progressive policies that include a 12-week maternity leave and the right to bring new babies into the office for the first six months. The Foundation reports that not only does its staff, given the security of being able to bring their babies to work, stay focused while in the office, but the policies have helped it avoid costly turnover due to employees quitting or requesting a part-time schedule.

While very few companies are set up in such a way that they could successfully implement the same type of post-maternity policy, any type of initiative that lets employees know the company supports them (not only in the office but also in their personal lives) goes a long way toward reducing turnover, increasing productivity and ensuring that long-term employees know the company recognizes (and appreciates) the sacrifices they’ve made on its behalf.