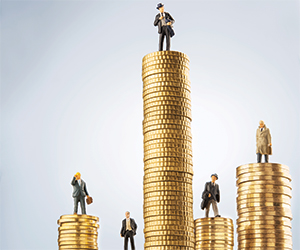 When faced with any given challenge, the natural human response is, “What’s in it for me?”

Consider the banking fiasco, the granddaddy of “What’s in it for me?” Our country watched in horror as executives paid themselves outrageous bonuses while their companies were failing. These senior managers felt no remorse at slashing their workforces and abandoning their customers while personally pocketing millions, if not billions, in government bailout funds.

If that’s the example we’re setting, it’s no wonder employees feel scant loyalty to the companies they work for. Your employees are the lifeblood of your company and the single greatest resource you have. A loyal work force can be the best friend you have when you are faced with a crisis.

I have been through tough times. During the recession of the early 1980s, Lincoln Electric’s sales dropped 40 percent in 18 months. Even though we had cut hours in our manufacturing plants from 54 per week to 30, we still had excess capacity. Conventional wisdom was pushing for layoffs — anyone with less than two years of experience. I felt it would be ethically wrong to let people go, not to mention it would be lazy and very bad business. I felt profits would have dropped even further with the blow to morale.

Then I had an idea: Why not ask our factory and office personnel to volunteer to help the sales force? Since I was vice president of sales at the time and I firmly believed that manufacturing minus sales equals scrap, I knew that increasing our top line instead of slashing the work force would produce badly needed revenue.

We selected 54 factory and 14 office personnel from a pool of more than 100 active volunteers. We trained them extensively on one of our new machines and sent them into the field from Maine to California. We nicknamed them “Leopards,” as they had “changed their spots” and were out “prowling” for business. The Leopards brought in approximately $2.8 million in new business and forged strong bonds with our distributors by creating a new list of customers for them to call on.

The Leopard Program showed our workforce that we were dedicated to holding on to people during bleak times. Some years later, I was able to appeal to the loyalty of those employees to help bail us out of Armageddon.

In 1992, 24 minutes after becoming CEO of Lincoln, I was informed that our European operations were in the red and we would have to report a second quarter loss. We would violate our covenants with the banks and default on our loans.

Prior to my turn at the helm, the company had purchased a number of overseas companies at the height of the market. Our purchases, coupled with a deepening European recession, were demolishing our bottom line.

The way I saw it, we could resort to massive layoffs and cut executive salaries to save money, or we could resort to extraordinary measures to increase revenues and profits. I was under tremendous pressure to slash our workforce.

After taking some drastic measures in Europe to stop the bleeding, we were still in trouble.

Then I had an idea: Why not manufacture and sell our way out of this mess?

Once I made the decision to forge ahead, I did the only thing I knew to do: I turned to our U.S. employees for help. I presented a 21-point plan that called for our U.S. factories to boost production dramatically and for our sales force to sell our way out of the crisis. I announced to our employees that, rather than downsize, we would make the U.S. company profitable enough to offset the losses abroad, remain within our bank covenants and borrow money to pay the bonus.

The U.S. company went into overdrive.

Instead of downsizing, we hired almost 1,000 additional employees. Four hundred fifty people in bottleneck areas gave up 614 weeks of vacation, with some people working seven days per week for months. The sales force also gave a herculean effort. Sales rose from $1.8 million per day to $3.1 million, a 72 percent increase! We renegotiated our bank loans and paid the bonus. Our phenomenal turnaround became known as “The Miracle on St. Clair.”

I think it’s time we take a hard look at layoffs as a first resort. People are not expendable. We need to find creative solutions to replace downsizing as a cure-all for a company’s financial woes. It is management’s responsibility, by definition, to find these solutions, to plan ahead and to be flexible enough to respond to any new situation.

Donald F. Hastings, chairman emeritus of The Lincoln Electric Company, recently released Behind the Mask: Embrace Risk and DARE to Be Better with co-author Leslie Anne Hastings. During his 44-year career at Lincoln Electric, Donald F. Hastings rose from sales trainee to CEO and chairman of the board. Throughout his rise, Hastings led Lincoln to manufacture new product lines, avoid downsizing during economic slumps and replace outdated policies and procedures. Grabbing the helm of the floundering company as newly elected CEO, Hastings’ unorthodox management style inspired Lincoln to hire nearly 1,000 new employees and design programs to “manufacture and sell” its way out of trouble. Violently opposed to layoffs, he helped Lincoln rise from the ashes to record sales and profits, an accomplishment the employees dubbed “The Miracle on St. Clair.”

“I may be David goading Goliath, but I believe layoffs, in general, are a sign of catastrophic failure on the part of management,” says Donald F. Hastings. “To please Wall Street, we are dehumanizing business to a point that is unconscionable. It’s lazy and it’s bad business.”