You are here: Home / Just In / SynDaver Labs’ Appearance on ‘Shark Tank’ Garners $3 Million Offer from Celebrity Investor
Just In  |    | 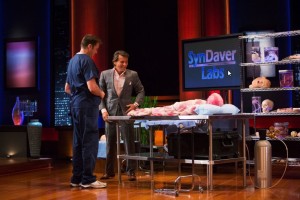 offered $3 million to Christopher Sakezles, Ph.D., M.D., a Tampa scientist, for a stake in his Florida- and Arizona-based company, SynDaver Labs, Friday on the television show “Shark Tank.”

Dr. Sakezles accepted the offer on national television and plans for the new partnership are being finalized.

“I’m very pleased with the outcome of the ‘Shark Tank’ appearance,” said Dr. Sakezles. “We were able to secure exactly what we were looking for and what we needed to continue our growth.”

Dr. Sakezles, a Tampa-native, founded SynDaver Labs in 2004 when he needed to test medical devices he was developing but didn’t have funding for the required animal studies. As a result, SynDaver Labs was born.

Every product or procedure designed to be used on humans is required by the Food and Drug Administration or the Consumer Product Safety Commission to be proven safe and effective via simulated use testing. SynDaver’s Synthetic Human is an ethical and cost-effective way to get this done.

“This is obviously good not only for ethical reasons, but also because avoiding animal use saves a great deal of time and money,” said Dr. Sakezles. “So, I started designing synthetic organs to test devices and over time they became very elaborate.”

According to Dr. Sakezles, the SynDaver Synthetic Human is the most sophisticated hands-on surgical simulator ever devised. It bleeds and breathes, and even the pupils dilate when they are exposed to light.

“We are the only company in the world that makes synthetic cadavers,” Dr. Sakezles said. “And all other anatomical models on the market are made from plastic or rubber, while ours are made from a proprietary library of more than 100 synthetic human tissues.”

The system works with all known imaging equipment, including CT, MRI, fluoroscopy and ultrasound, and all known surgical systems – even those that employ energy such as lasers.

A base model is scheduled to be released soon, which will cost approximately $25,000, while the ultra-high-end Synthetic Human Patient currently retails for around $100,000.

SynDaver has the world’s largest database of live-tissue properties, and all SynDaver tissues are made from water, salts and fibers. The company currently has 10 patents on these materials, processes and related products. SynDaver Labs is headquartered in Tampa, Florida, and employs more than 100 people. The company also has an advanced research facility located in Phoenix and is planning additional facilities in the U.S., China, Europe, and Latin America.