You are here: Home / Just In / Sundt Construction Completes Runway Replacement at U.S. Air Force Base
Just In  |    | 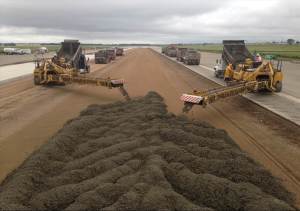 The design-bid-build, heavy civil construction project was completed in just six months while the base remained operational –  a feat that was crucial in maintaining national security, as the base is a strategic part of the Air Force Global Strike Command and home to one of only two squadrons of B-52 Bomber aircrafts in the U.S.

Requiring approximately 42,000 cubic yards of concrete and 36,000 tons of asphalt, the newly replaced section of airfield, designed by the U.S. Army Corps of Engineers, stretches 8,900 feet long and includes new lighting and storm drain systems on both sides of the runway.

Sundt’s other recent military paving projects include construction of a $23 million apron and taxiway at Cannon Air Force Base near Clovis, New Mexico; a $3 million taxiway, apron and runway extension at Michael Army Airfield in Dugway Proving Grounds, Utah; and a $24 million Auxiliary Landing Field for the F-35B aircraft at Marine Corps Air Station in Yuma, Arizona. Sundt Construction, Inc., known nationally for its innovative approach to construction services, the firm is currently ranked the 62nd largest construction company in the United States by ENR, the industry’s principal trade magazine.