You are here: Home / Just In / Phoenix Gets World Premiere of Unique Sports Fan Technology
Just In  |    | 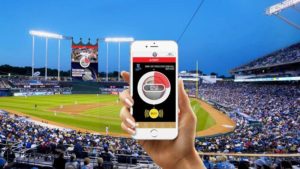 The Peoria Sports Complex in Phoenix will host the world premiere of the innovative fan engagement app during the Cactus League game on Friday, March 24.

Playing on the arena’s big screen – and on fans’ smartphones simultaneously – DROPIT is a fast-paced, high-energy 60 second reverse auction where prices go down instead of up.

“DROPIT brings adrenaline pumping competition to the palm of your hand,” says co-founder Peter Howell. “We couldn’t be more excited about coming to Arizona to be part of Major League Baseball’s spring training.”

Howell says that DROPIT brings competition beyond the field and into the stands. Until now, DROPIT has lived online, with hundreds of reverse auctions conducted for items such as iPhones, Bose speakers, GoPro cameras, Beats headphones – and even a car. A Fiat Punto with a retail price of $12,000 sold in 18 seconds for $8,426 – a 30% discount. DROPIT will announce the items that will be auctioned at the Peoria Sports Complex several days prior to the games.

“Winning bidders need nerves of steel,” says Peter Howell. “DROPIT harnesses the greatest technology of the 21st century – the smartphone – in an adrenaline-inducing way. We have combined the pace of a video game with the live action of a big stadium screen, the intimacy of the smartphone screen, and people’s love of shopping for a bargain.”

Howell says that mobile phones have created a huge challenge for live sporting events, fans are constantly distracted and not engaging with the game like they used to. So far no company has been able to connect the fan with their mobile, the team, the sponsors and the video boards. In-stadium entertainment has been practically unchanged since the introduction of large scale video boards 1985. While screen technology has advanced, the content has remained within a broadcast frame. “DROPIT is the first interactive use of the big screen, and will bring a new drawcard to the sights, sounds, and excitement of America’s favorite sports by creating memorable game day experiences.”

The Cactus League debut is DROPIT’s first step into US professional sports. The company is in talks with a number of major league sporting teams interested in adopting the technology and is about to announce an exciting new partnership that will greatly accelerate growth in the US market.

“We have developed an economic model whereby all parties involved benefit financially,” says Howell. Over 4,000 people tested the DROPIT app to validate the technology, with 92.5% of people who participated returning for further auctions. “We created irrefutable engagement,” says Howell.

DROPIT INC. is a fan engagement and live event entertainment platform company headquartered in San Francisco and founded by brothers Peter and Brendan Howell in New Zealand in 2015. Designed to turn shopping into a game experience, DROPIT has used their patented gamification technology to create a mobile platform that enables brands to deeply engage their customers in unique ways. DROPIT is supported on iOS, Android, and online via the web. For more information, visit https://www.dropit.xyz.