You are here: Home / Just In / McCarthy Building Companies Selected as General Contractor for Odysea In The Desert
Just In  |    | 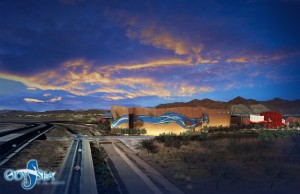 McCarthy Building Companies was recently selected as general contractor for the OdySea Aquarium, a new Scottsdale-based attraction slated to break ground summer of 2014 and open in the fall of 2015 at Via De Ventura and the 101 in Scottsdale at the Salt River Pima-MaricopaIndian Community, adjacent to Butterfly Wonderland and the Odysea Mirror Maze.

When completed, it will be thelargest aquarium in the Southwest and promises a high-tech, high-entertainment, oceanic educational adventure like no other in the industry–-all in the unlikely setting of the Sonoran desert. The 16-acre attraction, designed toaccommodate up to 15,000 visitors daily, will join Butterfly Wonderland andOdysea Mirror Maze as the third destination attraction of this entertainment district.

OdySea Aquarium will be a two-level facility that will span more than 200,000 square feet.  Visitors will move to each level via acrylic tunnels while viewing some of the most fascinating animals of rivers and oceans in the world. Among some of the unparalleled features will be the SeaTREK experience that will allow guests to descend deep into the “ocean” where they will be surrounded by sea creatures on all sides. Other features will include a state-of-the-art 3D theater, staffed presentations, and a visitor experience that has

never been accomplished in any aquarium in the world.  Described as “SeaWorld meets Disneyland,” this experience will not be revealed until opening, but “will be an absolute show-stopper,” said Amram Knishinsky, PhD, and principal founder.

Visitors to the OdySea Aquarium will embark on a journey exploring all areas of marine life—from the bayous and coral reefs to deep abysses of fresh water and salt water.  A sampling of the planned exhibits includes Rivers of the World, American Rivers, Amazon Rivers, Shores, Penguins, the Great Barrier Reef, and “the Bizarre & the Beautiful,” including jellyfish, octopus, large king crabs and seahorses.  Educational media boards, placed throughout the facility, will provide hands-on experiences, illuminated world maps, and sounds from different regions all over the globe. The OdySea Aquarium will also include a Lighthouse Caféserving a full menu and light snacks, and an OdySea Treasures Gift Shop.  Additionally, the facility will accommodate private events up to several hundred guests.

aquariumexperience. We are hopeful that visitors from across the country will want to add this to their ‘must do’ Arizona itinerary,” Knishinsky said.

Amram Knishinsky, Martin Pollack and Rubin Stahl are the development and management team behind the hugely successful Butterfly Wonderland and Odysea Mirror Maze/Laser Maze attractions that opened 2013. The trio were also responsible for the Newport Aquarium in Kentucky that Newsweek and Zagat named the “#4 Best Aquarium in the country,” and the OdySea Experience, a highly acclaimed marine-related facility in Mohegan Sun, Connecticut.

OdySea Aquarium will be both a for-profit facility employing more than 250 individuals while its 501c3 non-profit foundation will administer all the educational programs and services.