You are here: Home / Just In / Growth Surge Scheduled to Accelerate as Offerpad Estimates Huge Expansion Through 2020
Just In  |  Online  | 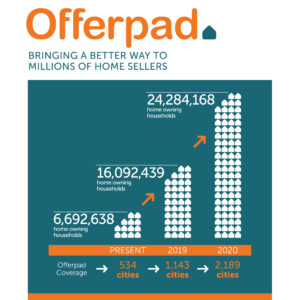 The leadership team at Offerpad is strategizing the company’s ambitious plans to become available in over 2,100 cities across the U.S. over the course of two years, providing its solution to an estimated 24 million consumers looking to purchase or sell a home. Having seen tripled growth year-over-year since the on-demand homebuyer opened its doors in 2015, Offerpad aims to surpass that growth rate through 2020. The real estate start-up’s streamlined home selling and buying experience is met with excellent customer satisfaction and demand is at an all-time high.

Energized by its mounting growth, Offerpad is on track to achieve a $2.5 billion annual run rate in real estate transactions. The company is currently active in eight metro areas from coast to coast with services available in 400 cities. Recently announced was the expansion to a sprawling 134 cities surrounding Dallas-Fort Worth; as of November 1, Offerpad will be live in 534 cities. “This is an exciting time for homeowners and buyers. Offerpad’s mission has always been to make the home selling and buying process as simple and frictionless as possible for our customers. It’s amazing to know that we’ll be available for so many families, households and individuals in many new cities across the nation,” said Offerpad co-founder and CEO, Brian Bair.

In addition to the 534 cities Offerpad will be operating in later this year, the company plans consistent expansion through 2019 that will make services available in an estimated 1000+ cities by the end of next year. In 2020, Offerpad intends to step it up even more and introduce its hassle-free home selling and buying platform to an enormous 2100+ cities in and around large metro areas all over the country.

To support Offerpad’s already blistering growth rate, the company recently announced the first ever relocation of its corporate offices. Based in Arizona’s East Valley, Offerpad made public last week that it plans to move headquarters into a much larger space in neighboring Chandler, Arizona – home to Intel and Paypal offices. The new space, more than tripling the size of Offerpad’s current home, will be available for move in by March 2019. It will encompass the company’s core values and lend itself to Offerpad’s creative, technological and innovative approach to real estate as it prepares to further accelerate its expansion.

Market expansion is not the only growth Offerpad is experiencing during the company’s most intense stage. Swift external growth has ushered in waves of employee onboarding at every level. Within the past few months, Offerpad has recruited a new CTO, Gint Grabauskas and a new COO & Chief of Staff, Rahim Lakhani. Overall, Offerpad’s employment around the country has increased 89% and 276% since September 2017 and June 2017, respectively.

ABOUT OFFERPAD
Offerpad is revolutionizing the real estate industry by providing an innovative and convenient way to sell or buy a home. Founded in 2015, the leadership team brings decades of real estate experience that collectively has purchased, renovated and rented or sold more than 100,000 homes. Offerpad is a privately held company, headquartered in Arizona, with markets in Atlanta, Charlotte, Las Vegas, Los Angeles, Orlando, Phoenix, Salt Lake City and Tampa.