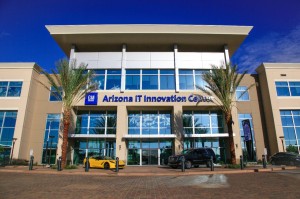 is adding to its roster of Information Technology Innovation Centers with today’s grand opening of a facility in the Phoenix area, the company’s fourth such center.

The center, which will enable GM to in-source the company’s innovation capabilities and tap into a pool of new and experienced IT talent, joins innovation centers already operating in Warren, Mich.; Austin, Texas; and Roswell, Ga.

GM’s IT innovation centers are part of a companywide transformation to improve performance, reduce the cost of ongoing operations and increase its delivery of innovation. GM announced Chandler as the site of the company’s fourth IT Innovation Center in March 2013, and construction on the 170,000 square-foot center was completed in June this year.

“We have made significant progress transforming GM IT over the past 20 months,” Mott said. “The success of the Chandler Innovation Center is yet another important proof point that illustrates our progress.”

GM expects to hire a total of 1,000 employees at the Chandler Innovation Center over the next five years. Approximately 500 employees are employed at the facility, about 25 percent of whom are recent college graduates.

“The official opening of the IT Innovation in Chandler and the creation of about 1,000 high-paying, skilled jobs is great news for the local economy,” said Arizona Gov. Jan Brewer. “Today’s event speaks volumes about the business-friendly environment we have created in Arizona, including our high-tech talent and competitive cost of operating. I could not be prouder of our state and what this announcement means for the future of Arizona’s economy.”

Said Tibshraeny: “GM is exactly the type of technology employer we need in Chandler and in our state. The GM Innovation Center is a perfect complement to Chandler’s Price Corridor, and furthers the city’s reputation as a regional hub for innovators and world-class IT professionals.”