You are here: Home / Just In / Flushing Archaic Beliefs and Finding Inspiration in the Achievements of Women
Just In  |  Online  |

Flushing Archaic Beliefs and Finding Inspiration in the Achievements of Women

Our Kiterocket Phoenix office is located downtown in the historic Luhrs Tower, built in 1929. The building hails from a time when the only women working at a company were the receptionists and secretaries. The men’s room, spacious and nicely appointed with classic fixtures, ample stalls and subway tile, is located off our main entry. The women’s? A single toilet and sink in a small cramped corner of the stairwell.

This was an issue for the women in the office when we first moved in. So, not long after, we staged a coup and successfully commandeered the luxurious men’s lavatory as or our own, which our (outnumbered) male colleagues kindly agreed to.

Clearly, times have changed since 1929, not only at Kiterocket, but everywhere. Women and men alike are now filling C-suites in corporations across all industries, from traditional fields like law, politics, accounting, insurance and banking, to construction, philanthropic organizations, education, advertising, high tech, entertainment and journalism.

In this spirit of changing landscapes, 10 of us from Kiterocket (seven women and three men) were invited to attend the annual In Business Magazine’s Women of Achievement awards in downtown Phoenix. This story-telling event honors the achievements of Phoenix’s most successful businesswomen. It is presented by In Business Magazine and hosted by Rick McCartney, president and CEO, InMedia; and Rachel Egboro, founder, The Whole Story. 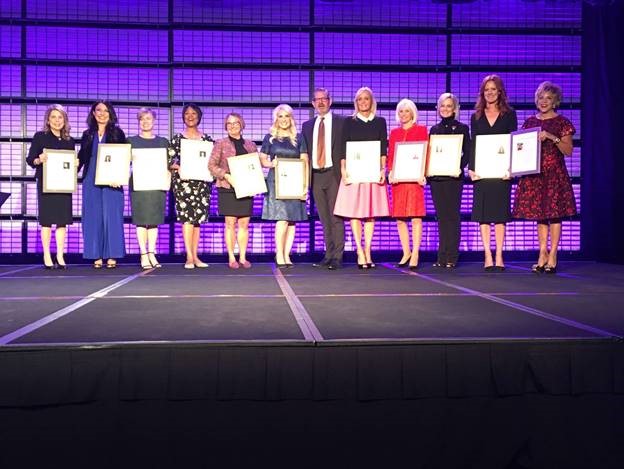 In Business Magazine’s 2019 Women of Achievement with publisher, Rick McCartney

This year, Cindy Hensley McCain, Chairman of Hensley Beverage Company and widow of Senator John McCain, was the Linda M. Herold Lifetime Achievement honoree. Additionally, 14 women were recognized as 2019 Women of Achievement. They include:

The Stories They Told

Throughout the course of the luncheon, six of these remarkable Women of Achievement captivated an audience from the business community, as well as Arizona government dignitaries, with their stories of overcoming monumental challenges to achieve their goals. These women showed us that no one makes it to the top or achieves anything without experiencing failure and struggle along the way.

Each storyteller wove an amazing, inspiring tale about how she has grown to become the leader she is today. Each story illustrated the speaker’s hurdles she overcame as well as her achievements. These women didn’t take no for an answer. It was inspiring how rejection didn’t stop them from achieving their goals but pushed them even harder to achieve what they knew they deserved.

We were all left with the impression that women can do anything, get through anything and become anything we want. And no matter how successful you are, along the way, you learn many lessons. In fact, after the event ended, our CEO, Martijn Pierik, said he wonders why women aren’t running the world already.

The Importance of Humility

Dr. Joel P. Martin was the first woman in the U.S. to own her own advertising agency. She credited her mother with giving her the confidence that she could be anything she wanted. This resonated with those of us who heard the same message from our parents. Ironically, during her travels working with leaders around the world, Martin realized she was the leader that needed development the most.

Katherine Kemmeries Cecala’s secret to success is to find out what you do well and then do it. For her, that was math, and so she became an industrial engineer. Because she spoke up about the disparity between her all-girls’ school and the all-boys’ school nearby, she got them to add calculus to the curriculum. Early in her career, she was told to be like Mary, the only other woman in the room. Mary doesn’t speak up during meetings. Cecala didn’t follow that advice and eventually, Mary started speaking up too.

Cecala taught us that helping others see their potential can change the world. Her motivation is to leave the world better than she found it. Cecala explained what together a company can do to improve revenue, company morale and success. It made her story even better that her company is a nonprofit that helps others.

Candace Hunter Wiest had a rough start to adulthood—married at 17 and a single mother of three by the time she was 22. But she knew what she wanted—to be the president of a bank. She set goals at the beginning of her career to get there. Even though Wiest faced many moments of doubt about her abilities, she never gave up.

Wiest taught us that a woman can play in what used to be a man’s world, and that there are firsts for everything. She looked herself in the mirror and told herself to stop acting like a girl.

“There’s only one way out of a corner. Someone is gonna die, but it’s not gonna be you,” she said, jokingly. Then she put on bright red lipstick and made her mark. She didn’t think there was enough red lipstick in the world to get through the banking crisis of 2009, but somehow, she did it, and her bank was one of the few to survive.

From Letitia Frye, we learned about facing tragic moments and learning from them. She was hit by a car that left her plagued with vertigo and PTSD. Frye lost two loved ones to suicide, and as a successful entrepreneur and entertainer, she struggled with work/life balance. She learned to separate the two for her own health and happiness. Frye learned how to say “no” and put her needs ahead of her work.

So many entrepreneurs believe they need to put everything into their work to be successful—and maybe they do—but what is more important is balance. Take the time to connect with the people around you, and especially yourself. When she volunteers, Frye doesn’t wear makeup or heels, and wears a baseball hat. One of her colleagues compared her to a superhero, saying  they’re lucky to know both Peter Parker and Spider-Man. She says she prefers to be Peter Parker, because being Spider-Man is exhausting.

Bahar Schippel survived a childhood in war-torn Iran, was separated from her parents and sent to boarding school in India. Seven years later, the family was reunited and escaped together as refugees to the United States. After that, becoming a high-powered tax attorney and partner at a major law firm must have been a walk in the park. She taught us what happens when you never give up. We also learned about the powerful impact the right mentor can have. For Schippel, that person was her mother.

The Importance of Self-Care

Christy McClendon made us realize that it’s OK to have an outside persona that sometimes is different from who you are on the inside. But it’s also OK to show your vulnerability and share your story. “When we tell our story, it owns us a little bit less,” she explained. Taking time for yourself is important, and having time to do yoga, meditate, work out or whatever makes you feel good, is key in life.

Be the Change You Want to See

Lastly, from Cindy McCain, this year’s Women of Achievement lifetime aware recipient, we learned how having a passion for the good of people will change the world. She’s living proof that if you put your heart into something, you can be happy and successful. McCain also stressed the importance of family and what their support can do for your own success. She’s someone who carved a path in a man’s world without selling her soul. Based on the testimonials of Sheriff Paul Penzone and Governor Doug Ducey, it’s clear that McCain has gained the respect of the “good ole boy’s club.”

At Kiterocket, many of our clients serve the technology and renewable energy industries. Despite ongoing efforts to bring more women into these scientific- and technology-related fields, the fact remains that it’s still a male-dominated environment. For a group of women who spend their days working primarily with men, attending this event reminded us of our own strengths, similar to those of the Women of Achievement. Succeeding in the business world—and at life—requires a careful combination of resiliency, humility, strength, passion, empathy and compassion. These qualities aren’t gender specific. We all have the capability to do anything we set our minds to—and that includes obtaining a key to the executive washroom, whether it’s the tiny one in the hallway or the spacious one in the main office.