You are here: Home / Just In / Fluor Completes Construction of State-of-the-Art Solar Energy Facility in Arizona
Just In  |    |

125-Megawatt photovoltaic facility is one of largest in the world 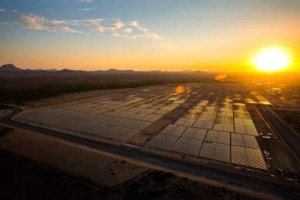 Fluor Corporation announced today that after two years of engineering, procurement and construction work, it achieved substantial completion of the Arlington Valley Solar Energy II facility for Arlington Valley Solar Energy II, LLC (AVSE II), a member of LS Power Group. The 125-megawatt facility compiled of five blocks, each generating 25 megawatts, is located in Maricopa County, Ariz. and is among the world’s largest photovoltaic farms. The facility had already begun supplying clean, renewable energy to the region as of May 1, 2013, when the project announced the completion of the first block and initial delivery of electric energy from the AVSE II facility. Fluor joined LS Power and Arizona Governor Jan Brewer at the site to celebrate the initial power milestone.

“This utility-scale solar project could not have been completed without the close cooperation between LS Power, the project stakeholders and Fluor’s project execution team,” said Matt McSorley, senior vice president of Fluor’s Power business. “We’re proud of the hard work of our engineering and construction teams, and we look forward to providing operations and maintenance services at the AVSE II facility.”

“We are pleased that Fluor has completed the construction of AVSE II in a safe manner, and ahead of schedule,” said John King, executive vice president of LS Power. “The project has benefitted from the efforts of countless contributors, and we’d like to thank them all.”

The AVSE II facility sits on approximately 1,160 acres of land – the size of more than 500 football fields. The project helps make Arizona one of the leading states in solar panel installation.

Fluor’s engineers in the company’s Irvine, California, office were responsible for designing the facility. In completing the construction work, Fluor installed more than 600,000 PV panels and pulled 6 million feet of cable.

Fluor was initially awarded the lump-sum EPC contract in October 2011, and then received a follow-on award to provide operations and maintenance services for the facility for an additional five-year period.