You are here: Home / Just In / Bioscience Firm VisionGate Announces Transition to New Space in Phoenix Tech Center after Graduating from CEI Business Incubator in October
Just In  |    | 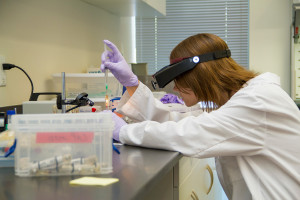 VisionGate is opening its new CLIA laboratory and headquarters at the Phoenix Tech Center after graduating from the CEI business incubator in October.

Most organizations can pinpoint those pivotal moments in their history which forever shape the development and growth of their business. For bioscience firm VisionGate and the Center for Entrepreneurial Innovation (CEI), it was the day they collectively chose to join forces within the CEI business incubator facility in Phoenix, Arizona.

This week, VisionGate became the most recent and most successful client graduate of the incubator to date, outgrowing the facility and relocating in October to its new CLIA laboratory and headquarters in Phoenix.

“VisionGate is a perfect example of our strategy to better support innovation and bioscience in Phoenix,” said Mayor Greg Stanton. “This is a cutting-edge company, grown and nurtured here in Phoenix, that attracted significant national interest when it was ready to expand. VisionGate and the City of Phoenix working together to find a perfect location to keep this phenomenal company here in Phoenix is an impressive win for our region.”

In 2013, VisionGate was in the process of transplanting much of its team from Seattle, Washington, as part of its continued efforts toward the technical development of the company’s revolutionary 3-D imaging technology (Cell-CT) for early lung cancer detection; CEI was a young incubation program seeking to grow its regional footprint through its support of leading technology companies and entrepreneurs.

“We saw an opportunity to accelerate our commercialization path within the CEI program,” said VisionGate President Scarlett Spring. “Our team met with CEI Executive Director Jeff Saville, as well as the leadership from the Maricopa Corporate College, and soon recognized the shared vision we had toward developing a mutually beneficial partnership that would position both organizations as leaders within our specific niches of the bioscience community.”

Over the next two-and-a-half years, VisionGate and CEI co-created the “VisionGate Biosignature Laboratories,” a CLIA-licensed lab housed within the incubator. With commercial biotechnology equipment and sophisticated design and furnishings, the lab ultimately aided in the successful commercialization of VisionGate’s LuCED lung test, a non-invasive test aimed to detect lung cancer early. It also facilitated the company’s ongoing research and testing of its Cell-CT technology, which images the resulting cells and deciphers normal from abnormal cells.

For Saville, the impact of the partnership extends beyond the walls of the lab. “VisionGate is a homerun company for our program,” he said. “Not only do we now have a premium lab space available for growth-stage companies, but we also supported an incredible client that has grown to nine local employees, raised $25 million investment to date, and earned numerous awards and public recognition.”

CEI supports tech companies at all stages of development with customized business advisement and mentorship, onsite 3D printing and design services, as well as access to a robust network of community investors and partners. In particular, CEI conducted 360-degree stakeholder interviews to help generate a SWOT analysis.

“This is a testament to the value of business incubation when you commit your resources in the best interest of your companies that are taking all the risk,” Saville added.

VisionGate now sets its sights on establishing new frontiers in the early cancer detection space. Spring views the transition to a new location as the first step in the scale-up phase for the company, which includes raising additional investment for the purpose of manufacturing more of its platform technology.

“CEI has served us well by allowing us the flexibility to develop our clinical laboratory environment and continue to validate our technology,” she said. “But we are ready to advance the company toward becoming a major player in the marketplace.”