You are here: Home / Just In / Arizona Tribal Gaming an Economic Engine for the State
Just In  |    |

Arizona Tribal Gaming an Economic Engine for the State 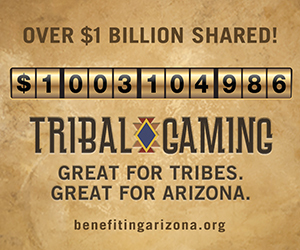 Valerie Spicer, executive director of the Arizona Indian Gaming Association (AIGA), announced today that Tribal Gaming has contributed more than $1 billion in shared Tribal gaming revenues to Arizona over the past 11 years. The historic achievement was recorded in the first quarter of FY 2015, according to the Arizona Department of Gaming. Tribal gaming revenue directly supports Arizona public and charter schools, trauma and emergency services, economic development through tourism, wildlife conservation, and cities and towns throughout the state.

In addition to its impact through sharing revenues, Tribal gaming is a proven economic engine for the state. A statewide economic impact study of Indian gaming, commissioned by AIGA in 2012, verified that more than 15,000 people were directly employed in Indian gaming in Arizona and, when indirect jobs were added, that number exceeded 22,000. Jonathan B. Taylor, author of the study, concluded that if tracked by the Bureau of Labor Statistics, Tribal gaming in Arizona would rank above mining and logging, making it the third largest industry sector in the state.

“In 2002, when the Tribal leaders envisioned how to share gaming revenues, they wanted to provide not only for their own people, but for everyone who calls our state home,” said Spicer. “Our culture teaches us to give back and help others. Through their wisdom, the Leadership developed the Arizona Benefits Fund.”

Records published by the Arizona Department of Gaming show that Tribal contributions have continued, uninterrupted, even during the worst of the Great Recession. The first recorded year of funding is FY 2004. Since that year, Tribal gaming has contributed nearly $430 million directly to Arizona’s school districts to support students and teachers, and approximately $215 million to more than 64 hospitals in Arizona to provide emergency and trauma services. Tourism and wildlife conservation have each received about $61.5 million, and cities and towns have received nearly $105 million. According to Peter Rhee, M.D., Chief, Division of Trauma, Critical Care, Burn and Emergency Services, UA Department of Surgery, the trauma center in Tucson would not be where it is today without the money made available by Tribal Gaming dollars for trauma and ER services.

“Shared gaming funds have provided a consistent and much-needed source of revenue for Arizona,” said Sherry Cordova, chairwoman of the Cocopah Tribe, who was a member of the Prop 202 AIGA Leadership. “It is remarkable to realize that Tribes have been able to give back more than $1 billion to our state. The Arizona Benefits Fund and Tribal Gaming have been more impactful than any of us could have imagined.”

Tribal gaming is working for Tribes by creating positive and lasting impacts that benefit current members and future generations. Gaming is a major source of employment for non-Tribal and Tribal people alike, especially in rural areas of the state where economic opportunities are limited. Because of gaming dollars, Tribal governments are addressing chronic reservation deficits in education, health, housing, public safety and infrastructure. Tribal gaming also benefits Tribes who don’t engage in gaming through the negotiation of transfer agreements which provide much-needed revenue to fund those governments.

“While the purpose of the Indian Gaming Regulatory Act is to promote economic development and opportunities to increase self-sufficiency for the Tribes, the State also benefits from Tribal contributions that fund important programs,” said Dan Bergin, director of the Arizona Department of Gaming. “Passing the $1 billion threshold in contributions to Arizona is quite an achievement, and we congratulate the Tribes on reaching this milestone.”

Concluded Spicer, “Reaching the $1 billion mark is clearly significant; sharing revenues sets our industry apart. Arizonans who need trauma care or have children in school, own businesses that rely on tourism, or revel in the natural beauty of our state, all benefit directly from Tribal gaming. It’s why we say, ‘It’s the Tribal in Tribal Gaming that makes the difference.’”