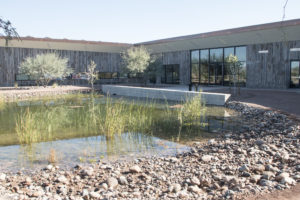 Liberty Wildlife was recognized for transforming a sand and gravel pit along an industrialized section of the Rio Salado habitat into a LEED Platinum-certified community gathering space. For more than 30 years, Liberty Wildlife has nurtured the nature of Arizona by providing wildlife rehabilitation, environmental education and conservation services. Designed by WEDDLE GILMORE black rock studio, the new campus was lauded for its energy efficiency and conservation features that have resulted in a 63 percent reduction in potable water needs.

That this year celebrates the 150th anniversary of Frank Lloyd Wright’s birth, it is a fitting tribute that the Wright House earned a legacy award as one of the state’s most iconic structures. The home was threatened with demolition by local developers in 2012, galvanizing an unprecedented collaborative effort to preserve and celebrate one of Wright’s last masterpieces. The home was gifted back to the institution from where it was born – Wright’s legacy, The School of Architecture at Taliesin, will take over planning for the preservation of the house and citrus groves. The school will realize Wright’s vision for the house as a place of community, celebration, inspiration and education.

Arizona Forward celebrated the 37th anniversary of its signature awards program, drawing more than 500 social influencers and innovators representing public and private sector interests. For the third consecutive year, all categories were open to submittals from throughout the Grand Canyon State; from 1980-2014, the program focused exclusively on Maricopa County.

“These projects represent what’s best about Arizona,” Brossart said. “Leaders in communities of all sizes are thinking far into the future and crafting a legacy that will make Arizona environmentally and economically sustainable in the years to come.”

Nominations received for Arizona’s oldest and most prestigious awards competition demonstrate not only the priority of green design, but also a shared ethic to protect natural resources and build in harmony with the environment.

“I was impressed and inspired by the number and caliber of entries we previewed – it demonstrates a serious commitment to our environment and quality of life,” said Lead Judge Ed Fox, who retired from Arizona Public Service Company (APS) after an 18-year career where he served as chief sustainability officer following his tenure as director of the Arizona Department of Environmental Quality.

Since its inception in 1969 as Valley Forward, Arizona Forward has brought business and civic leaders together to convene thoughtful public dialogue on regional issues and to improve the sustainability of communities throughout the state. The organization operates with the belief that businesses must take a leadership role in solving the complex and sometimes controversial problems that confront growing population centers.

In addition to the David and Gladys Write House Foundation and Liberty Wildlife,

Through a historic agreement, the Bureau of Reclamation, the State of Arizona, the City of Phoenix and the Walton Family Foundation will fund 40,000 acre-feet of Colorado River system conservation through the Glia River Indian Community; this amount is roughly equivalent to 35 percent of the water Phoenix draws from the Colorado River each year. This is the first agreement for Colorado River system conservation in Arizona developed collaboratively to include city, state, federal and environmental-group funding. The intent is to lay the foundation for a long-term, sustainable, system conservation program that includes funding from multiple cities and environmental groups in addition to state and federal funding. This contribution will help forestall potentially catastrophic shortages and create a more resilient Colorado River that benefits the entire region.

A design process involving more than 40 participants set out to create a game-changing model of sustainability. Energy modelling and extensive costing scenarios provided the client and design team with information to make the very best decisions. Since plants are the central focus of the garden, greenhouses are placed at center. Its 24’x24′ grid extended over the site to provide future shading of paths and buildings to reduce overall site heat gain. The greenhouses feature energy-saving polycarbonate cladding which, unlike glass, diffuses light for greater plant health. Salvaged materials are used throughout to reduce waste/cost, and a powerful “Great Wall” of giant boulders divides the site between public and operational areas.

This project is a dynamic combination of an urban farm and vocational training facility for developmentally disabled adults while providing the logistics and infrastructure to other small-scale agriculture operations. These efforts increase the access of fresh, locally grown produce while offering educational opportunities. Pueblo Viejo Fields and Food Hub serves those with the least access to healthy food. Quincea-Green on Purpose Alliance also provides education to community members on nutrition and the health benefits derived from making better food choices.  This includes demonstrations of how to grow, prepare and cook healthier meals in consideration of cultural preferences. The QGPA model is replicable in areas of urban blight that have poor access to fresh quality food products.

As major sources of greenhouse gas emissions, cities can implement real solutions. Phoenix, the nation’s fifth-largest city, can lead by example. The municipality has now completed three GHG inventories for its operations – base year of 2005, the 2012 update and the 2015 update. It has also just completed its first community-scale inventory of base-year 2012 GHG emissions within Phoenix boundaries. The 2012 update showed that emissions from city operations fell by 7.2 percent below base-year 2005 levels. The 2015 update demonstrated a 15.6 percent decline from 2005.  The Phoenix City Council has set a milestone of a 40 percent reduction below 2005 by the year 2025. In the longer term, the council has committed to make the Phoenix community carbon-neutral by 2060.

The architect/owners’ new studio is a gesture of optimism to a forgotten, lower income, Tempe neighborhood. They chose a small, undeveloped site in a depressed residential area near the ASU campus with light rail stops, bike lanes and a perpetually regenerating young population. Their new office is a 6,600-square-foot masonry and glass building, set in a garden irrigated with gray water and captured rainwater stored in a 2,500-gallon underground water harvesting tank. After 12 months occupancy, the building is operating at 40 percent below energy model predictions. The studio interior epitomizes a healthy work environment, with an open plan layout and industrial-scale pole fans augmenting natural ventilation, improving air quality and reducing the need for air conditioning. The “family” table provides a consistent, unifying work surface which is, nonetheless, customizable and varied to suit individual workers.

The Underwood Family Sonoran Landscape Laboratory is the heart of the UA College of Architecture, Planning and Landscape Architecture. Transforming 1.2-acres of parking lot into an oasis, the project was part of a 2007 expansion and was integral to an architectural/landscape expression of college values. The research-oriented public garden demonstrates water-conscious design, urban wildlife habitat, urban flood mitigation and urban heat-island reduction. It employs five classic arid landscape design principles: water sustainability, reduction of the urban heat island, reduction of urban flooding, reconnection with nature and an interpretive oasis.

The LEED Platinum, net-zero Prescott College Housing project involved collaboration between students and the neighborhood. The students expressed a strong desire for outdoor living and convenience that translated into an outdoor equipment washing station for rock climbing, as well as a barbecue/outdoor dining area with permanent and movable seating in the common areas, outdoor living rooms, a native edible/medicinal landscape and a terraced food forest that allows students to grow and cultivate their own food adjacent to their front doors.

The goal for the Phoenix Preserves is to connect humans with nature in an environmentally responsible way. Desert Hills provides a human connection to the desert within a transformative and sensitive design aesthetic. This included accommodating, in an inconspicuous manner, a 180-plus automobile and equestrian lot. Extensive site analysis ensured the project respected, celebrated and connected to nature and was not forced onto the site, but rather grew out of the site. The location includes a past burn area with minimal existing vegetation. The design respects and preserves the natural washes that pass through the site and embraces natural topography. Design features integrate natural materials, such as rusted steel, integrally colored concrete and unique patterns of the desert cholla.  The main walkway transects the site and connects Carefree Highway to the preserve visually and physically. Water harvest swales collect storm water runoff.

Recyclery is a public/private partnership between the i.d.e.a. Museum and the City of Mesa’s Environmental Management and Sustainability Department. The project began with a goal to develop a fun, innovative program to help children and adults learn what can and can’t be thrown into the city’s trash and recycling barrels. The team created an interactive touch-screen game featuring recycling information. The Recyclery also received new furnishings and added photomurals to inspire green actions. Visitors can create art from materials that have been discarded from local industry, such as donated plastic caps from Boeing. Periodically, museum and city staff offer demonstrations and special art projects focused on recycling. Also featured is information about the city’s Club Blue program that teaches children about sustainability.

Begun in 2007, Cox Conserves is Cox Enterprises’ national sustainability program focusing on reducing waste and energy consumption and conserving water, as well as achieving “zero waste to landfill” companywide by 2024. Cox Communications’ Phoenix-based Watkins Warehouse, a distribution hub for the southwest region, reached this milestone in 2016 by diverting 98 percent of its waste from landfill disposal. By implementing co-mingled recycling programs, leveraging a hub-and-spoke refurbishment and reuse system for end-of-life electronics and telecommunications equipment, and inspiring employees to adopt sustainable behaviors, CCI’s Arizona locations on average maintain a 60-percent rate of waste diversion from the landfill or 1.2 million pounds of material. Through the program, 100 percent of the revenue from this recycling — nearly $60,000 to date — benefits local Arizona nonprofits.