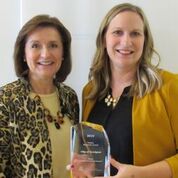 The city of Goodyear won two of the awards, one for attracting Andersen Corporation to the city as the deal of the year and one for its website, “Goodyear Economic Development.”

Other websites earning Golden Prospector Awards were the city of Mesa’s “SelectMesa.com,” the city of Prescott’s “PrescottBiz.com” and the city of Surprise’s “AZTechCelerator.com.”

The city of Eloy was recognized for its marketing brochure, “Intersection of Value, Location and Opportunity,” and Pinal County’s multimedia promotion “Outdoor Activity Video” also received a Golden Prospector Award.

In addition to the Golden Prospector Awards, there were eight Awards of Merit also presented at AAED’s Fall Forum in Prescott.

“The Golden Prospector Awards were established by AAED to encourage and recognize excellence in economic development,” said Joyce Grossman, AAED’s executive director.  “The creativity and innovation demonstrated by this year’s winners is a testament to how effective they are in their respective communities.”

AAED, founded in 1974, has a mission to serve as Arizona’s unified voice advocating for responsible economic development through an effective program of professional education, public policy, and collaboration.