You are here: Home / In Business / Women Leaders of All Ages, Backgrounds Honored at Event to ‘Give Back and Celebrate’
In Business  |  Achievements  |

Women Leaders of All Ages, Backgrounds Honored at Event to ‘Give Back and Celebrate’ 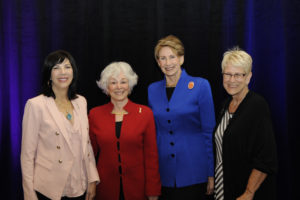 From doctors to nonprofit founders to high school students, woman leaders were honored for their work in the community at the ATHENA Leadership Awards on April 4 in Tempe. Presented by ATHENA Valley of the Sun (AVOS) in Mesa, a new affiliate of ATHENA International™, the event applauded the achievements of area women chosen based on the organization’s mission to “Leave No Women Leader Behind.”

According to AVOS CEO, Dr. Kristine Quade, “We were so proud to share the remarkable and inspiring stories of these amazing women and to ‘Give Back and Celebrate’ their contributions to our community. This diverse group personifies a new legacy of leadership in Arizona.”

Young ATHENAs were also recognized for their exemplary contributions to their community while they continued their course work at high school or college: Frankie O’Neill, Aseel Atalla, Alexis Darby, Lauren Hawks, Katarina White and Millicent Darko.  The Young ATHENAs personally presented the HAIL winners with their awards.

ATHENA International™ founder, Martha Mertz, and President, Andrea Conner, were also on hand to honor and thank the honorees for their achievements.

After earning her bachelor’s, master’s and law degrees at Arizona State University, Barrett practiced Aviation law and was named partner at one of Arizona’s largest law firms before the age of 30. She has served as U.S. Ambassador to Finland, was a back-up spaceflight participant for the Soyuz TMA-16 flight to the international space station and has climbed to the top of Mt. Kilimanjaro. In 1994, Barrett was the first female Republican candidate to run for Governor in Arizona.

As President of the International Women’s Forum and member of the US/Afghan Women’s Council, Barrett founded Project Artemis: A program to train and mentor Afghan women entrepreneurs at the Thunderbird School of Global Management. She currently serves on the boards of the Smithsonian Institute and other major institutions and corporations.

HAIL award recipient Dr. Brenda Combs went from living on the streets, surviving violence, abuse and addiction, to receiving her Doctoral degree in 2011. She has been recognized as a Distinguished Teacher of the Year by Laura Bush, has been featured on the Today Show on NBC and recently founded Finding My Shoes – a nonprofit to serve the homeless.  Combs was recognized for the principle of “Live Authentically.”

Dr. Nadia Katrangi, selected for the principle of “Learn Constantly,” is not only a life-long learner but also a life-long educator. Katrangi, who was born in Syria, attended Damascus University where she excelled and earned her Medical Degree. Nadia co-founded The Good Tree Institute of Arizona in 2010 to provide assistance and support to Muslim women in the community.

Dr. Claire McWilliams was honored for “Building Relationships.” A professed teacher “to her bones,” Dr. McWilliams teaches life skills to increase motivation and reduce turnover within the hospitality industry at Arizona State University. She also organizes international service trips for students to study culture and sustainability and to implement forms of building relationships within the areas of service and hospitality.

Annie Groth exemplifies the principle of “Foster Collaboration.” After a successful career in the restaurant industry, Groth now uses her financial services expertise to develop programs on Financial Literacy for impoverished single, widowed and divorced women who feel vulnerable without the skills needed to develop financial independence and security.  Groth is also an active board member of the YWCA Metro Phoenix – an organization whose mission is to eliminate discrimination, empower women and promote peace, justice, freedom and dignity for all.

Jody Farley built the nonprofit “Singleton Moms” to ensure that mothers fighting cancer didn’t have to worry about their family’s needs to allow them to focus on healing. The organization takes care of the small yet important aspects of life, including providing food and other necessities. Farley believes that no woman should have to “go at it alone” and says that it’s “those small things that bring a sense of normalcy to the family when there is so much chaos and fear.” Farley was selected for the ATHENA principle of “Advocate Fiercely.”

After 30 years in the corporate world, Marion Douglas created MOMA’s house – a nonprofit that works with women committed to transforming their lives while in recovery from domestic violence and human sex trafficking. Based on the philosophy of “My Own Movement toward Achievement” (MOMA), the 501(c)3 has provided services to over 100 women since opening their doors in 2009.  Douglas was chosen to represent the principle of “Act Courageously.”

Founded in 1982 by Mertz, ATHENA International™ is a non-profit organization seeking to develop and honor women leaders through mentorships and other initiatives. Since the program’s inception, more than 87,000 women leaders in over 500 communities across the world have been recognized for their work.

Sponsors for the ATHENA Leadership Awards included the Rob and Melani Walton Foundation, Kolbe Corp, C.H Robinson, She Power-China and the ASU Lodestar Center. Proceeds from the event will help fund mentors and other critical community initiatives for women in Arizona.

Quade says, “We were thrilled to feature the stories of these women who personify the principles that we teach. These leaders have all gone the distance, both personally and professionally, to serve our community.”

She adds, “We don’t want the stories of women to be buried for 50 years, like in the recent film ‘Hidden Figures’ which depicts the remarkable but unknown contributions by African-American women mathematicians to the space program. It’s time that we start a new narrative by telling the stories of these accomplished individuals and encourage more women to lead and be recognized.”

ATHENA Valley of the Sun hosts monthly meetings at locations throughout Phoenix. For membership information or to donate, visit www.athenaaz.com, email Kristine@athenaaz.com or call (612) 860-5992. 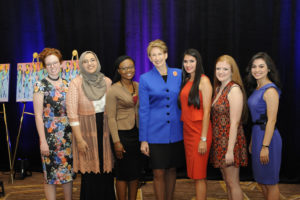