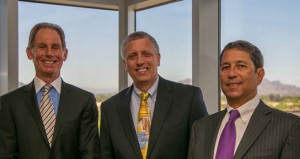 U.S. News and World Report and Best Lawyers ® recently named one of North Scottsdale’s largest law firms, Nussbaum Gillis & Dinner, P.C., as one of the 2014 “Best Law Firms.” The award comes shortly after the firm’s named partners, Randy Nussbaum, Greg Gillis and Dean Dinner were recently selected by their peers for inclusion in  The Best Lawyers in America©,  2014.

Listed on the The Best Lawyers in America ®  website are quotes from clients including Tim Hammer of TJM Painting Inc. who said, “Nussbaum Gillis & Dinner is a great firm and has great lawyers.” Christine Ritter of Rental Service Corporation in her client comment is quoted as saying, “I have worked with Nussbaum through my equipment rental company and they are a very good firm and work with the client on several issues,”

Greg Gillis’ areas of practice include construction law, commercial collection, real estate law, and bankruptcy litigation, which he has performed in Arizona for 25 years. During that time, he has appeared and litigated cases in 14 of Arizona’s 15 county superior courts.

Dean Dinner’s practice has emphasized bankruptcy law, creditor-debtor rights, workouts, commercial transactions and commercial litigation. He is certified as a Bankruptcy Specialist by the Arizona Board of Legal Specialization. His experience in the bankruptcy field is extensive, involving representation of secured creditors, surety companies, unsecured creditors, creditor committees, lessors, trustees and debtors in Chapter 7, 11, 12 and 13 proceedings.

The firm, which recently celebrated its fifth anniversary, was founded in July of 2008 by Randy Nussbaum and Gregory Gillis with a focus on complex bankruptcies, commercial litigation, construction law, real estate law, just as the economic downturn began. Despite the recession, the firm surpassed its initial three-year business plan in just two years. Dean Dinner, one of the initial partners, became the third named partner in 2010 and the firm added to its expertise to include trust and estate planning and probate, administrative law such as within the pest control and landscaping industry, and insurance defense work. Over the years, the firm has continued to expand to its current number of 11 lawyers and nearly 30 employees total.