You are here: Home / In Business / TPP May Drive International Trade and Investment for Arizona
In Business  |  By the Numbers  |  January 2014

TPP May Drive International Trade and Investment for Arizona

Negotiations are continuing on the U.S. Trans-Pacific Partnership (TPP), which aims to broaden trade between the United States and 11 other countries — Australia, Brunei, Canada, Chile, Japan, Malaysia, Mexico, New Zealand, Peru, Singapore and Vietnam. Arizona trade with TPP countries — exports and imports — supported nearly 278,000 jobs in 2011. Notwithstanding controversy over issues and secrecy that has plagued the negotiations since they began in 2010, the aim of improving international trade has kept the players at the table. Expanding economic ties with TPP countries is predicted to help support our state’s economic growth and jobs, according to a fact sheet recently prepared by Business Roundtable (BRT), an association of chief executive officers of leading U.S. companies with $7.4 trillion in annual revenues.

“The 11 other TPP countries represent critical markets for U.S. goods and services exports, accounting for a combined population of 482 million people and representing roughly 15 percent of global trade,” says John Engler, president of BRT, whose member companies, which comprise more than a third of the total value of the U.S. stock market and invest $158 billion annually in research and development — equal to 62 percent of U.S. private R&D spending — generate more than $540 billion in sales for small and medium-sized businesses annually. “The TPP holds significant potential to create new opportunities for Arizona, all 50 states, and the overall U.S. economy to benefit from increased commercial engagement with these countries.” 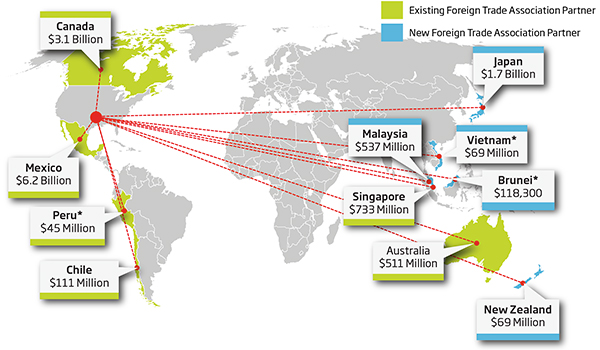