You are here: Home / In Business / Toll Brothers Wins Gold Award for Best Outdoor Living Space at The Nationals 2017
In Business  |  Achievements  | 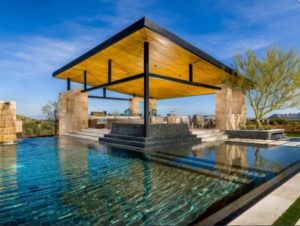 Tahon Ranch in Scottsdale, a luxury home community by Toll Brothers, won a Gold Award at The Nationals 2017, an annual competition honoring the best in new home sales, marketing and design.

The Trovilla model was the winner for the Best Outdoor Living Space.

The Nationals Awards ceremony is one of the highlights of the National Association of Home Builders International Builders Show held January 10-12 in Orlando, Florida.

Toll Brothers dominated the Best Outdoor Living Space category, taking four of the five Silver Awards for home communities in California and Arizona. Talon Ranch was the only Arizona community to be recognized — and ultimately win.

The Best of Outdoor Living Space was judged on concept, creativity and impact of furniture and accessories. The Trovilla model, set upon a breathtaking Sonoran desert backdrop with views of Pinnacle Peak and Four Peaks mountain ranges, represents al fresco living at its finest.

With design and landscape by Creative Environments based in Tempe, the Trovilla’s outdoor spaces rival the most famous five-star resorts with desert contemporary style, functionality and luxury.

Designed for entertaining, the Trovilla features a dramatic great room seamlessly overflowing onto an oversized covered patio through expansive multi-slide doors. The light-filled dining room and bonus room each open onto an additional covered patio.

The backyard is awe-inspiring with another oversized patio surrounded by a spectacular negative edge pool and cascading water features. This extraordinary swim-up covered patio is also accessible via concrete steps over the pool, adding to its uniqueness and exceptionality.

Add private sitting areas as well as a designated area for playing lawn games and it’s the perfect setting for outdoor enjoyment on a grand scale.

In keeping with the natural terrain, natural desert landscaping with boulder outcroppings grace all of the outdoor living spaces and courtyards encompassing the Trovilla model home estate. Thirty-three home sites at Talon Ranch each average more than one acre.

“The Nationals are the most prestigious awards of their kind, setting the benchmark for innovations in new home design, marketing and sales,” said Meredith Oliver, chairperson of The Nationals. “NAHB’s commitment to recognizing originality, imagination and success has been exemplified by its award winners since the competition’s inception.”

During a three-day judging process, a panel of seven industry professionals from across the country determined the Gold and Silver award winners from a field of more than 1,100 entries.

The Talon Ranch sales office, 11756 East Quail Track Drive in Scottsdale, is open from noon to 5:30 p.m. on Monday, 10 a.m. to 5:30 p.m. Tuesday through Sunday. For additional information, visit www.TollBrothers.com/luxury-homes/Arizona.

Toll Brothers, an award-winning Fortune 600 company founded in 1967, embraces an unwavering commitment to quality and customer service. Toll Brothers is currently building in 20 states nationwide and is a publicly owned company whose stock is listed on the New York Stock Exchange (NYSE: TOL). In FORTUNE Magazine’s 2016 Survey of The World’s Most Admired Companies®* Toll Brothers was ranked #6 worldwide across ALL INDUSTRIES in Quality of Products/Services Offered after Apple, Walt Disney, Amazon, Alphabet, and Nordstrom, and before Netflix and Facebook. In the same 2016 survey, Toll Brothers was named the #1 Home Builder Worldwide. The Company was named America’s Most Trusted Home Builder™ 2015† by Lifestory Research, receiving the highest numerical score among the largest 133 home builders in the country. Toll Brothers was also recently honored as national Builder of the Year by BUILDER magazine, and was twice named national Builder of the Year by Professional Builder magazine.

*FORTUNE Magazine’s survey of the “World’s Most Admired Companies®” for 2016 began with over 1,500 companies across more than 50 industries, and asked over 4,000 executives, directors, and analysts to rate companies in their own industry on nine criteria (Go to http://fortune.com/worlds-most-admired-companies/ for the full methodology.) From FORTUNE Magazine, March 1, 2016 ©2016 Time Inc. FORTUNE and The World’s Most Admired Companies are registered trademarks of Time Inc. and are used under license. FORTUNE and Time Inc. are not affiliated with, and do not endorse products or services of, Toll Brothers, Inc. †Toll Brothers received the highest numerical score in the United States in the proprietary Lifestory Research 2015 America’s Most TrustedTM Home Builder study. Study based on 43,200 new home shoppers in 27 markets. Proprietary study results are based on experiences and perceptions of consumers surveyed between January and December 2014.