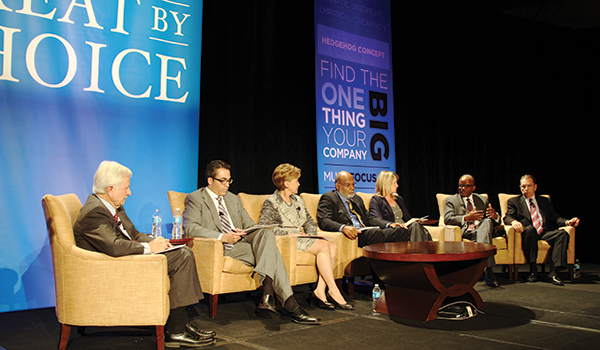 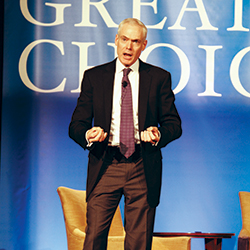 Leadership. Vision. As president and CEO of National Bank of Arizona, Keith Maio knows strength in both areas is a desired combination for success in any business. But when it comes to making a state successful, those traits are critical. It’s about “developing that common vision almost like you would for a business and engaging leaders to move toward that vision.”

He’s using his experience in a new initiative to identify and support Arizona’s leaders and, more importantly, help get them on the same page when it comes to guiding the state’s future.

This effort was launched recently when Maio served as a key organizer of the Arizona Leadership Forum, a gathering of more than 700 top executives from around the state. They represented Arizona’s corporate, philanthropic, nonprofit, tribal and government sectors. The Feb. 8 event “allowed us to start a higher level of conversation about how we can work together to improve our environment,” Maio says.

The keynote speaker was author Jim Collins, whose books such as Good to Great reflect his research into successful companies and organizations. “He was actually very intrigued that we were convening this for-profit/not-for-profit group across the state,” says Maio, “and to his knowledge this is the first time he has seen that from any state — in other words, putting that kind of attention and action toward a collective movement.” The day ended with the panel “Leading Change for a Greater Arizona,” led by Lattie Coor, Ph.D., president emeritus of Arizona State University, that also featured J. Doug Pruitt, board chair of Greater Phoenix Leadership and retired chairman of The Sundt Companies, and community volunteer Juanita Francis.

For Maio, one of the key takeaways from the forum was a noteworthy finding in a pre-event survey of registrants: Arizona doesn’t seem to have a lack of leaders, just a lack of leaders working together. “We can’t fix this with our Leadership Forum but what we can do is start the conversations, start trying to move the ball,” he says. “It’s that leadership group working together toward a common vision.”

His bank’s work with Arizona leaders actually began before this year. In September 2011, National Bank of Arizona was joined by Freeport-McMoRan Copper & Gold Foundation and The Phoenix Philanthropy Group to sponsor the Arizona Nonprofit Leadership Forum, an invitation-only event for more than 250 key decision makers from nonprofit organizations statewide. Maio says the decision was made to eliminate the divide between nonprofit and for-profit businesses by expanding the forum this year to include top executives from both sectors. “We just wanted to take a leadership position in convening those groups together, and not define that by tax status but just by leadership,” he says of the focus shift.

Insights collected at the forum will be leveraged throughout the year to produce a white paper based on pre- and post-survey results, a Web portal with forum content will be created, and an economic vitality study will be conducted, says Maio. In addition, town halls will be staged to continue the dialogue about promoting learning and communication across a variety of sectors and geographies. “By working together as unified leaders, non- and for-profit companies can make the biggest impact on the future of our state,” he says

Pruitt would like to see what he calls the forum’s “missing link” — political leaders — become part of the action. “They need to be at the table and they need to become part of the solution,” he says, and the leaders must hold accountable those who let ideology get in the way of finding and creating real, positive solutions as well as find and support others who will. We need to “keep the pressure on to address the real issues in front of us and work to get the collaborative spirit that was in that room [at the forum] alive.”

To keep the momentum, Francis says the state’s best leaders should be identified and supported. “Coalesce around one or two specific initiatives and support our best leaders to make those things happen successfully,” she says.

Even those who didn’t attend the forum can play a part. Laurel Kimball, founding principal of The Phoenix Philanthropy Group, urges individuals to select an actionable item they are passionate about, such as retaining young talent in Arizona or protecting the state’s natural environment, then share metrics about the results of their involvement on the forum’s and Arizona Nonprofit Leadership Initiative’s shared website.

She also encourages residents to become well-informed on facts about our state at such websites as the Morrison Institute for Public Policy’s Arizona Indicators. “We hope that individuals and organizations will seek to be part of the dialogue about Arizona’s pressing issues as we reach out to leaders from the nonprofit, business and governmental sectors in all parts of Arizona, of all ages and backgrounds,” says Kimball.

Pruitt is encouraged about what lies ahead, saying the time is right for Arizona to begin to address the issues that are in front of us and become a very different state in the next few years. Most people he knows are willing to work to make Arizona better if they know goals have meaning and can be fruitful. “I think first, you have to ask, and secondly, you have to show that what you are doing is about adding value, making Arizona better for future generations and that what you are doing is sustainable.”

The Road from Here to There