You are here: Home / In Business / Sundt Construction Honored for Railway Engineering Project
In Business  |  Achievements  | 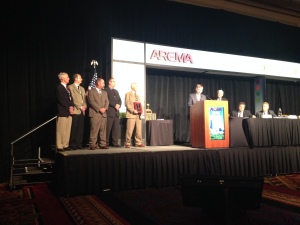 , one of the country’s largest and most respected general contractors, is among a team of construction and design professionals recently honored with the 2014 Dr. William W. Hay Award for Excellence for its work at the Union Pacific Strauss Rail Yard in Santa Teresa, New Mexico. The American Railway Engineering and Maintenance-of-Way Association’s (AREMA) Board of Directors established the award to recognize outstanding achievements in railway engineering. Sundt, along with rest of the construction and design team members, was honored for employing innovative railway engineering procedures and products throughout the three-year project.

Completed in March, 2014, the new facility, located on a 2,200-acre parcel of desert about two miles north of the U.S./Mexico border, has an estimated economic impact of $500 million for the local area and will eventually be the headquarters for more than 600 permanent jobs. Sundt’s work on the $400-million, 12-mile-long project began in 2012 and included a $190-million contract for the project’s second phase, which involved construction of 26 new buildings and a fuel facility, installation of a number of underground utilities and all of the concrete paving.

“This facility will serve as an important point for the movement of goods along the 800-mile Sunset Route from Los Angeles to El Paso,” said Sundt Project Manager Eric Weston. “Our ability to self-perform the majority of the fuel facility work, which is the driving force behind the project’s development, and all of the concrete paving enabled us to finish on time and under budget.”