Home to several celebrities, local and otherwise, the Valley offers some notable lunch joints that have more than just a name attached. Great food, sports and music themes make these hot spots a must. 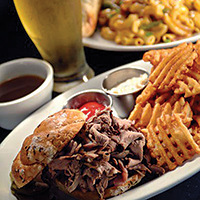 Perhaps the best-known celebrity in Phoenix today, Alice Cooper has given Phoenix a sports bar and grill that’s a memory in and of itself. The celeb-named entrees and starters on his menu will keep you feeling like you’ve truly come to an event with all of the local names, including Pat Tillman, Al McCoy, Bernie Mac and more. Soups, salads, sandwiches, burgers and wings — it’s all here.
101 E. Jackson St., Phoenix
(602) 253-7337

Dan Majerle is a sports icon in the area and has, since 1992, been a purveyor of great eats and sporting fun at his locations. With five locations — Chandler, Goodyear, Old Town, Downtown and now Flagstaff — Majerle’s has a seat waiting for you and your office mates. Enjoy burgers, salads, soups and much more alongside your favorite sporting event playing on the TVs.
5 Arizona locations

Ron Wolfley, four-time Pro Bowl player, sports talk-show host and color commentator for the Cardinals, is the name behind the north Phoenix hot spot. With 23 TV screens, it’s sure to have your favorite game for you to watch while you enjoy food for any palate. Three patios, fireplaces and comfortable surroundings accompanied by a menu that includes steaks, salads, pastas and much more.
21001 N. Tatum Blvd., Phoenix
(480) 515-2424