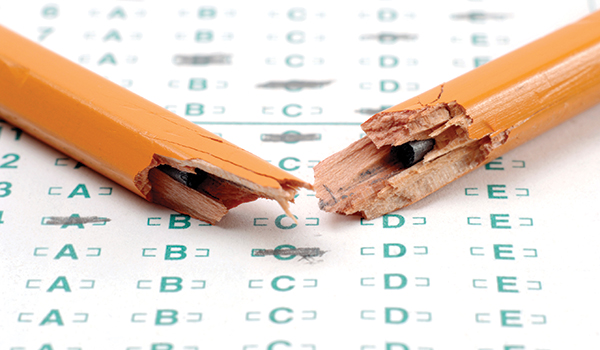 Ever since the No Child Left Behind Act amped up standardized testing throughout the nation in 2002, critics say results have been negative. The bottom line is, there is no clear correlation between standardized testing and the knowledge and skills kids will need to prosper in the 21st-century world of work. It seems we’re more interested in creating a homogenized work force than a nation of individuals who have learned what their talent is and how to bring it to work with them.

This problem begins very early on. We take kids in elementary school and give them tests. Those who do well are designated as “gifted and talented,” which means that everyone else is, by definition, ungifted and untalented. And that’s just not true. In effect, we’re devaluing all the capabilities that are not reflected in a standardized test. Of course, we want to take care of our academically proficient kids, but we have to find a way to do that without signaling to every other child that they were at the end of the line when talent was handed out.

Too many Americans are stuck in old ways of thinking, from the classrooms of our elementary schools and colleges to the workplace. But we’re in a new economy, and the path to the American Dream has changed. That means our old-school thinking must change as well.

We need to accept that the economy has changed. The first step to change is acknowledging it’s needed. Our employers are no longer competing with cheaper labor; they’re up against smarter labor worldwide. We hold a trump card, however: We have the most diverse pool of talent on the globe, whereas countries such as China and India have, by choice, a homogenous work force.

We must give career education greater priority. In China, every college student must, as a requirement of graduation, take a yearlong course that teaches them the skills and knowledge to manage their own careers effectively. In the United States, that instruction is missing from college curricula. This is important information, especially as 53.6 percent of all college graduates under the age of 25 are now either unemployed or underemployed.

We need to redefine talent so we can use it. Our culture has taught us that talent is the province of exceptional people doing exceptional things. We can see the talent of Lady Gaga but not the talent of an accounts payable clerk. And that’s myopic. We are all endowed with talent — whatever profession or avocation its performance may enhance — but we have to discover it, nurture it and then bring it to work with us.

We have to see ourselves as a “work in progress.” The world of work is changing at warp speed — new technology, shifts in the global marketplace and changes in consumer tastes. That’s why we need to be committed to continuous learning. Regardless of our educational degree, years of experience or level of seniority, we need to be acquiring new skills and knowledge all of the time.

Peter Weddle, a former recruiter and human resource consultant, is CEO of the International Association of Employment Web Sites, a trade organization. He has written or edited more than two dozen non-fiction books regarding careers and employment; he puts that knowledge into a new context in his first work of fiction, A Multitude of Hope: A Novel About Rediscovering the American Dream. Weddle is founder and former CEO of Job Bank USA, Inc., one of the largest electronic employment services companies in the United States.