You are here: Home / In Business / Stacey Caron Wins Silver and Bronze Stevie® Awards in 10th Annual Stevie Awards for Women in Business
In Business  |  Achievements  | 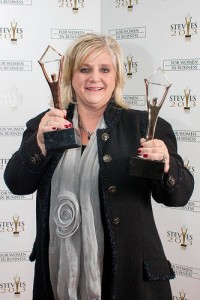 The Stevie Awards for Women in Business are the world’s top honors for female entrepreneurs, executives, employees and the organizations they run.  All individuals and organizations worldwide are eligible to submit nominations – public and private, for-profit and non-profit, large and small. The 2013 awards received entries from 18 nations and territories. Nicknamed the Stevies for the Greek word for “crowned,” the  awards were presented to winners during a sold-out event at the Marriott Marquis Hotel in New York City.

More than 1,200 nominations from organizations of all sizes and in virtually every industry were submitted this year for consideration in a wide range of categories, including Entrepreneur of the Year, Executive of the Year, Innovator of the Year and Women Helping Women, among others. “It is an honor to be named a winner of a Silver and Bronze Award among so many accomplished business women. The Spellbinders’ vision is to unlock the inner creativity in every individual through developing the most innovative, creative and inspirational craft products and projects on the planet. I thank the judges for recognizing my achievements,  both as an innovator  and entrepreneur,” said Stacey Caron, Spellbinders Co-Founder and President. Stevie Award winners were selected by more than 240 executives worldwide who participated in the judging process this year.

“For 10 years we have been recognizing the achievements of women in the workplace, and this year’s nominations were the most impressive class the judges have ever reviewed,” said Michael Gallagher, founder and president of the Stevie Awards.  “We congratulate all of this year’s Grand, Gold, Silver and Bronze Stevie Award winners for their achievements.”