You are here: Home / In Business / SRP Receives 2017 Freedom Award
In Business  |  Achievements  | 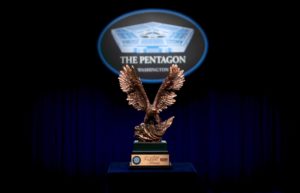 Salt River Project was one of 15 companies honored with the 2017 Secretary of Defense Employer Support Freedom Award for support of employees who also are members of the National Guard or Reserve.

The award, presented Friday by Deputy Defense Secretary Pat Shanahan in an annual ceremony at the Pentagon, is the highest form of recognition given by the U.S. government to civilian employers for their support of guard and reserve members and their families.

The only Arizona-based company honored, SRP was recognized for the role it plays in the nation’s defense and its above-and-beyond support for its military employees.

Associate General Manager Michael O’Connor, who headed the SRP contingent at the awards ceremony, said SRP is proud to support its military employees and enable them to serve the nation.

“We strive to make life easier for the families of our deployed military employees, holding dinner nights for spouses, and offering help with tasks such as lawn work, painting, auto repair and more,” said O’Connor. “Also, our CEO, General Manager Mark Bonsall, personally calls deployed employees to check on their well-being and to assure them that their jobs are secure.”

The Freedom Award was established in 1996 by the Department of Defense Employer Support of the Guard and Reserve (ESGR) to draw attention to the support provided by the Nation’s employer community. More than 17,000 nominations have been received since 2011. This year’s recipients were selected from 3,064 nominations submitted by Guardsmen and Reservists.

ESGR represents large and small employers from almost every industry, as well as from state and local governments. It received nominations for employers in all 50 states, Guam-Commonwealth of the Northern Mariana Islands, Puerto Rico, the U.S. Virgin Islands and the District of Columbia.

The annual Freedom Award ceremony on Friday included leaders from the ESGR, previous award recipients, current and former Department of Defense personnel, congressional representatives, and guard members and reservists and their families and friends.

Shanahan said the 2017 award recipients represent the best of the best and come in all shapes and sizes, from 40 employees to 150,000; from Georgia to Arizona, Wyoming to Massachusetts.

The other 14 recipients of the 2017 Secretary of Defense Employer Support Freedom Award were:

SRP is the largest provider of electricity to the greater Phoenix metropolitan area, providing service to more than 1 million customers.  SRP also is the metropolitan area’s largest supplier of water, delivering about 800,000 acre-feet annually to agricultural, urban and municipal water users.