You are here: Home / In Business / Sports Business Arizona: A Prix View of Things to Come
In Business, Just In  |  Online  |

Sports Business Arizona: A Prix View of Things to Come 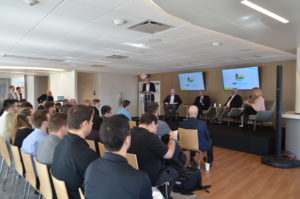 On Friday, February 9 , Group One Thousand One and ISM Raceway sponsored a symposium on the regional impact of sports at the ISM Raceway in Avondale, AZ.  The event was attended by local media invited guests and students from Arizona State University, who attended to learn about the sports’ ecosystem and how sports has impacted local communities in Arizona.

The event opened with a welcome from Bryan R. Sperber, president of ISM Raceway and was emceed by Rick Horrow, CEO of Horrow Sports Ventures as well as Verizon Indy Car driver, Zach Veach.

Horrow led panelists through a series of discussions on these subjects and highlighted the important role sports play in the everyday life of community members. From growing commerce and creating jobs to giving back to those in need and creating a culture of positivity, sports has played a vital role in American culture.

The event concluded with a Verizon Indy Car Series test on-track at the raceway.