The Sickness and Workplace Mix

Attitudes vary among employees on coming to work sick 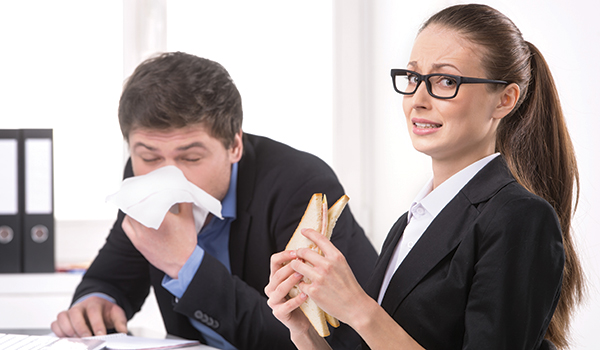 While employers deal with issues of healthcare coverage and employee benefits, the workplace environment is also impacted by the actions and attitudes of the work force. Study after study supports the belief that productivity is impacted by employees’ health; that healthier employees are more productive. But do employees consider the effect of their healthcare choices on their place of work? This is a question the public health and safety organization NSF International, an independent, accredited organization, addressed in a recent survey of American workers.

NSF found that about a quarter of the workers (26 percent) always go to work when they are sick, but there is a great deal of variance among the other 74 percent as to how sick they are before they decide to stay home. “Doctor’s orders” accounts for the smallest percent (9 percent); forming the greatest percent (34 percent) are those who make the decision based on feeling they are suffering the full effect of symptoms such as fever and upset stomach.

Age and gender generate different responses to being sick. Men are nearly twice as likely as women to go to work when sick (33 percent compared to 17 percent). Concern over meeting deadlines or being able to dig out of work that would pile up are reasons cited more often by men than women (45 percent compared to 38 percent) for coming to work when sick. This is also the reason cited by Gen Xers, who, at 54 percent, are more likely than other generations to come to work while sick.

How do the other employees feel about co-workers coming to work sick? Only 10 percent report no opinion. Of the 90 percent who do admit to judging their co-workers, a full two-thirds judge them positively, saying they come to work because they are hard workers. Fifty-seven percent view them with understanding, believing they can’t afford to miss work. Holding a negative view of workers who come to work sick are 16 percent who consider them selfish in not caring about the health of their colleagues and 13 percent who think they don’t trust their colleagues to do the job while they are out.