Raises $8 million in past year for Grand Canyon chapter 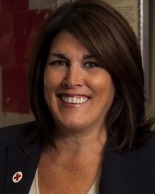 “Geri’s leadership ensures that your Red Cross is funded to be there when disaster hits, or when a military family needs help,” said David Emerson, CEO of the Phoenix Region of the American Red Cross.

“Geri restructured the development department at the Grand Canyon Chapter, hiring six development professionals to focus on relationship building that changed the culture of giving at the American Red Cross,’’  Bourget said.

Prior to the Red Cross, Wright helped increase unrestricted contributed revenue by 43 percent at the Heard Museum from 2004 to 2010.

Her community involvement includes being a 2013 Valley Leadership graduate and a 2008 American Express Non Profit Leadership Academy graduate.  She is a current board member of Camelot Therapeutic Horsemanship and a former board member of the Planned Giving Roundtable of Arizona.  She volunteers with the American Red Cross and received the 2012 Grand Canyon Chapter Volunteer/Staff Partnership Award.  She also financially supports a variety of nonprofit organizations in the Valley.

Wright launched her development career 18 years ago as a development associate at Camp Boggy Creek in Florida before moving to Arizona, where she has worked at the Aid to Adoption of Special Kids, the Arizona Science Center and the Heard Museum.