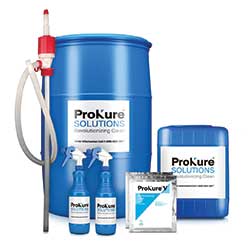 A patented delivery system for ClO2 (chlorine dioxide), a biocide long recognized for its effectiveness in odor and pathogen control but previously available only in large applications, brings the product within reach for small businesses. ProKure Solutions offers easy-to-store, long-shelf-life pouches that dissolve in water to reliably create specified concentrations, providing “a new tool for commercial users in numerous industries committed to providing a healthy environment for their clients and staff,” says ProKure principal Jason Lipsey.

Among advantages of ClO2 are it eliminates odor — not just masks it — and reduces labor while forming no dangerous byproducts. The biocide has broad commercial application, but ProKure is focusing on five primary markets, according to Lipsey. These are sports and fitness, from school to professional; justice and correctional facilities; long-term care; food processing; and transportation — public, private, fleet and dealership. Says Lipsey, “As cars move through the disposition program [being readied for resale], smells — like tobacco and pets — can have upward of 20 percent impact on price.” The ProKure pouches can be dissolved either into a solution in the concentration appropriate for the intended cleaning or in a container so that the ClO2 gas can be captured for use primarily as a deodorizer.

Ken and William Bezar had contacted Roz and Jason Lipsey, president/CEO and COO/CFO, respectively, of Jokake Construction, to demonstrate their product’s use for the Lipseys’ company. “We realized it offered a new tool to provide a healthier environment,” says Jason Lipsey, who was familiar with the compound as one of the best biocides available and with one of the lowest chemical footprints. Entering into a partnership with the Bezars and co-founding the new enterprise as ProKure, the Lipseys acquired ProKure as part of Jokake and established Phoenix as the West Coast office to the Bezars’ East Coast office in Pennsylvania.