You are here: Home / In Business / Politics in the Workplace: A Primer for Arizona Businesses
In Business  |  Legal  |  October 2016

Politics in the Workplace: A Primer for Arizona Businesses

Navigate around freedom of speech, political correctness and more 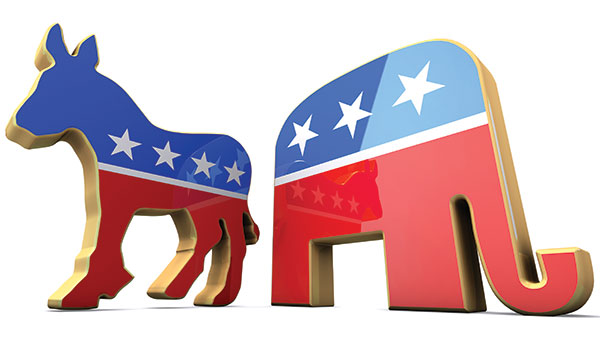 ‘Tis the season for contentious conversations, as the 24-hour news cycle is in overdrive with Clinton, Trump, immigration policy, Black Lives Matter, LGBT rights and healthcare concerns, to name just a few. The proper handling of hot-topic politics in the workplace should be paramount for all employers during this fiery political season, as these emotionally charged political issues involving citizenship, immigration, race, religion, age and gender can lead to host of problems for employers and employees alike.

While religion and politics make bad topics for first dates and family dinners, many employees incorrectly believe their workplace rhetoric is constitutionally protected. The First Amendment gives employees the right to speak their minds while on the job, but this Freedom of Speech does not extend to private employers, which, in turn, gives private employers leeway to set rules for what is and is not appropriate to discuss on the clock.

But there are exceptions, as the National Labor Relations Act imposes limitations on types of political speech employers can regulate. The NLRA, which was passed in 1935 in response to union busting by employers, applies to all private employers and, in many instances, protects politically charged discussion about changes to a workplace condition. Consequently, employees are granted more free speech protections to talk about workplace issues and their employers when it comes to issues such as minimum wage, immigration or health insurance, if those topics relate to their jobs and place of business.

As the election season continues to loom closer, there are several steps that employers can take in order to help navigate a number of taboo topics.

Neutrality Is Key: Private and public employers must be mindful that one employee’s idea of political expression can be considered an act of harassment by a co-worker. If a manager’s cultural or personal opinion appears to influence his or her hiring, firing and promotion decisions, bullying complaints or discrimination claims can potentially be filed with the U.S. Equal Employment Opportunity Commission. Politically incorrect jokes and even social media posts by managers can become suspect if the workplace appears unfriendly based on race, religion, gender or other protected classes.

Keep It Respectful: Clearly state in a “Code of Conduct” in the employee handbook that all employees will treat each other with dignity and will respect differences in opinions in the workplace. Repeatedly stress in numerous forums that, political or otherwise, all workplace speech should be tolerant of co-workers’ views, and advise managers to lead by example by avoiding political conversations.

Be Consistent: Provide refresher anti-harassment training for all employees in order to reinforce the company’s commitment to a peaceful work environment. Work to ensure that procedures are in place to meaningfully handle complaints and to take appropriate action when necessary. An iron-clad non-solicitation policy should be implemented that prohibits all forms of solicitation, including political campaigning, during work hours. Assure consistency in the enforcement of dress codes and non-solicitation policies to avoid the appearance of discrimination rooted in the employee’s political or religious views, such as T-shirts with inappropriate political statements.

Mind the Legalities: If a private business wants to curb political speech in the workplace, it’s imperative that the policies be viewpoint-neutral and applied consistently. Do not limit speech concerning workplace conditions or political topics linked to a worker’s well-being. Keep in mind that no policy should censor or attempt to control an employee’s political beliefs, despite what the general opinion is among ownership and management. Doing so may set a business up for costly litigation and/or investigation from the EEOC or other investigative bodies. Furthermore, make certain that any company policies relative to expression of political beliefs address how those opinions are being expressed by action, not just based on their political beliefs or feelings.

Keep It Productive: Private-sector employers generally retain the right to maintain a productive working environment, which can be negatively impacted by heated political debate. If employees are more focused on candidates’ platforms than their work assignments, redirect those discussions for breaks in non-working areas. Maintain consistency in enforcement and focus on the impact on productivity rather than the discussion at hand.

Lastly, plan appropriately for Election Day, as Arizona law allows employees up to three hours of paid time off for voting, unless the polls are open three hours before or after the employee’s work shift. A written set of guidelines can help standardize the process, as employees are required to apply for leave before Election Day, plus the employer can specify when the employee may be absent.

With proper planning and thoughtful execution, Election Day should be a productive event from both a business and a civic perspective.

Shayna Balch is a partner in the Phoenix office of Fisher Phillips LLP, representing employers in labor and employment litigation, employment discrimination and harassment, compliance audits and counseling and employment policies and procedures.