You are here: Home / In Business / Phoenix Is More Expansive than Expensive
In Business  |  By the Numbers  |  July 2016

Phoenix Is More Expansive than Expensive 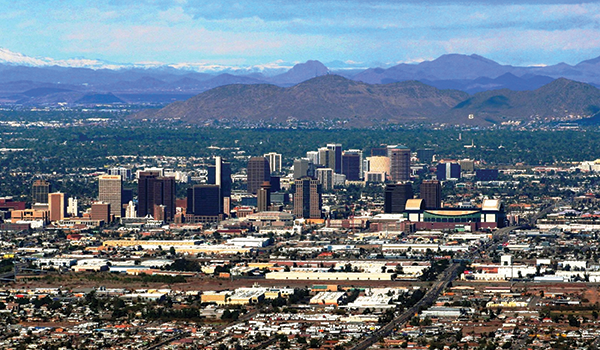 Data released recently by BuildZoom, the data-driven marketplace for remodeling and construction services, shows that Metro Phoenix’s rate of expansion increased 57.8 percent since 1970, compared to a 15.3 percent decrease for the nation — making it the seventh-fastest-expanding metropolitan area in the United States during this period.

These “expansive cities” may be contrasted with “expensive cities” such as San Francisco and Boston, which have reduced the pace of outward expansion, channeling economic strength into higher property values.

According to BuildZoom Chief Economist Issi Romem, Ph.D., “The new housing crisis of affordability is not a new development — it has been brewing since the 1970s, and was present beneath the surface even during the last decade’s housing bust.”

Cities’ outward expansion has, historically, played a key role in providing new housing, but the “expensive cities” are increasingly running up against barriers to growth, which arise from natural geography as well as an accumulation of prohibitive local land-use policy.

As Dr. Romem explains, “America’s largest cities — ‘the expensive cities’ — have slowed down their outward expansion and failed to compensate with densification, but failing to build enough new housing does not maintain their character. Instead, it affects the nature of who can and cannot afford to live in these cities. The result is a middle class exodus that fuels population growth in other cities that are growing — that is, ‘the expansive cities.’”

Densification of an area tends to be gradual, and Dr. Romem notes most of the country can be considered areas where it is not OK to build densely, and construction kept to low-rise buildings. Also, as areas are engulfed by the city, there are gaps of vacant land that may, later, attract interest for infill projects. “There is a small minority of areas where it is OK to build densely, and where ‘the sky’s the limit’ in some cases — particular sections of historic downtowns or walkable pockets of suburbia, which tend to be in downtowns that were swallowed by the larger metro area,” he says, emphasizing that these sections are typically more commercial or formerly industrial in nature and that “more often than not, historic downtowns and walkable spots in suburbia are places where it is clearly not OK to densify, for example when there is historic value to the place that calls for preservation.”

Metro Phoenix does not have substantial limitations on its expansion. An analysis a few years ago by Daniel Christen at Arizona State University looked at the growth of the Biltmore area, Uptown Phoenix, the Broadway Curve complex along I-10, and, most notably Scottsdale Airpark/Kierland between 1990 and 2007 as “edge cities” (centers of employment and shopping that are located away from a city’s central business district). And the City of Phoenix’s neighboring municipalities — which include Chandler, Glendale, Mesa, Peoria, Scottsdale and Tempe — have grown beyond bedroom communities to have shopping and employment centers of their own.

Source: BuildZoom. The full report is available on BuildZoom and contains maps and charts that illustrate Phoenix’s urban expansion and help compare it to the rest of the country.

• Geography. Slopes and water bodies, for instance, are barriers for Seattle and California’s Bay Area. In other cases, adjacent land may be protected for environmental reasons.

• How agricultural land is taxed. “The tax structure may make it less beneficial to convert land from agricultural use,” explains Issi Romem, Ph.D., chief economist for BuildZoom.

• Policies that prevent densification. These include, for example, zoning that specifies single-family housing, height limits and minimum lot sizes.

• And there are other, less obvious, factors, Dr. Romem points out. “These include how people are allowed to vote in their town hall [meetings].” If only those who are physically present may vote, he explains, voting is more likely to be dominated by people who are not working full time or are raising children rather than a representational cross-section of the population.