You are here: Home / In Business / Paul Johnson Drywall Compliance Manager Named to Industry’s List of Young Leaders ‘Generation Next: 2015’
In Business  |  Achievements  | 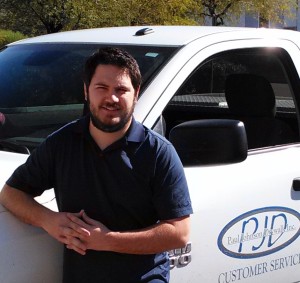 l Johnson Drywall Inc. (PJD), was named to “Generation Next: 2015,” the industry’s list of young leaders compiled by Walls & Ceilings Magazine. The publication, which covers business news, products and issues critical to the drywall industry, selected young leaders, under 40 years old, who are making a positive impact on the construction and drywall industry. In the “Generation Next: 2015” feature, Townsend is recognized for his leadership on several innovative projects that are helping to shape the future of the industry, as well as his work as a compliance manager.

One of the projects that Townsend is working on is the development of a job-site GPS tracking system that will be able to record employee time, overtime, project estimating and workforce needs predictions. The system would be automated, where site crews are tracked through their cell phones. Townsend is collaborating with the software developers to customize the time-keeping program for PJD, and is working to make it available to others in the construction industry as well.

Townsend was also recognized for his involvement on PJD’s employee hotline system. He helped to develop a hotline whereby employees can alert PJD’s Human Resources Department or company president of concerns and issues on a job site or related to employee pay questions and concerns.

In addition, Walls & Ceilings Magazine has also selected Townsend to the young leader list for his work as a compliance manager. Townsend joined PJD in October 2014, with his main responsibilities focusing on the well-being of PJD employees. PJD, an Arizona-based, family-owned drywall contractor, was established in 1967 and is now one of the largest in the Southwestern United States, with offices in Phoenix, Tucson and Prescott, Arizona; and Las Vegas.