You are here: Home / In Business / Owner of Scottsdale Brown’s Classic Autos in Receives Rookie of the Year Award at the 16th Annual Fleet Week Coronado Speed Festival
In Business  |  Achievements  | 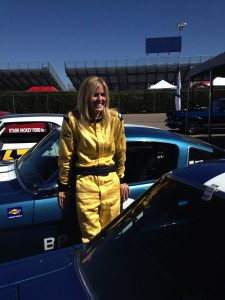 Addison Brown, owner of Brown’s Classic Autos in Scottsdale, Arizona, was named Rookie of the Year during the 16th annual Fleet Week Coronado Speed Festival.  The races are organized through the Historic Motor Sports Association (HMSA) headquartered in Montrose, California.  The award was presented during the event’s closing ceremonies onboard the USS Ronald Reagan.

Ms. Brown, driving a 1966 Shelby GT 350, ran 10 of the 11 laps on the 1.44 mile track with a best lap time 1minute 25 seconds, just eight seconds off the leader.  According to Llew Kinst, Director of Marketing for the HMSA, the award is not based upon who wins, but rather the driver who is a first-time participant in the event, driving well and in a great car.  “You could say our main criteria for the award are the size of the smile, demonstrating the spirit of the event and sportsmanship, and someone who enjoys putting on a good show,” Kinst said.  “Addison brought us all that and more.”

HMSA is one of the most respected historic racing organizations in the United States, producing class spectator events across the country.