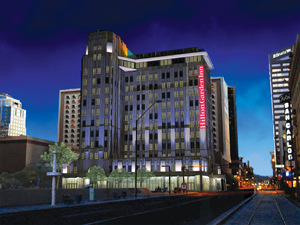 Preserving a Phoenix landmark and providing a mid-scale hotel option to Downtown Phoenix, CSM Corporation is renovating the long-vacant Professional Building at Monroe Street and Central Avenue to a Hilton Garden Inn.

From the outside, the hotel will look nearly identical to its predecessor, with its striking limestone façade, grand entryway and Art Deco architecture. Inside, the hotel’s common areas will feature the same interior style that made it famous in its heyday, from its 24-foot ceilings and ornamental bronze elevators to intricate wrought ironwork, rich colors and fully restored interior columns. The most striking feature of the building’s interior, the former bank lobby, will be restored to its original splendor and will serve as the main reception and gathering place for hotel guests.

“The city and the neighbors have been welcoming,” says Michelle Davis, general manager of the hotel, who expects to begin welcoming guests in December. “Everyone I’ve spoken to about the project is thankful that someone is doing something with such a beautiful building.” Considered an important historic site in downtown Phoenix, the Professional Building opened in Downtown Phoenix in 1932. It housed medical offices and Valley National Bank for many years, and was listed on the National Register of Historic Places on Jan. 8, 1993, but fell into disrepair after sitting vacant for more than 20 years.

“Redevelopment of historic properties is a real passion of our owner,” says Jim Macchitelli, CSM’s director of marketing and digital services, noting CSM has a demonstrated history of takin advantage of such opportunities to give guests a more unique feel to standard brands.

CSM, which owns and operates 40 hotels nationwide, has redeveloped other historic properties. Taking a 19th-century train depot, it transformed one end to the Renaissance Minneapolis Hotel and the other to a Residence Inn, with a water park in between. “The actual depot is an ice-skating rink, and hosts corporate events in the off-season,” Macchitelli says. CSM also operates the Residence Inn Milwaukee, a renovation of the 1920’s Gimbels Building.

With economic conditions in Phoenix improving, the company saw an opportunity to help fill in the hospitality choices with a mid-scale brand, according to Davis. And, in addition to employment at the hotel itself, “we will lease out retail space, therefore bringing more jobs in Downtown Phoenix,” she says.