Mid-Year Outlook: Expect a Bumpy Ride for the Remainder of 2020

As America gets closer to the presidential election, the country finds itself still struggling on several fronts: the COVID-19 pandemic, racial unrest, and most recently Chinese sanctions. And yet, the stock market has remained relatively stable over the past couple of months.

Stock-market bulls cheered the Tuesday morning after Memorial Day as the S&P 500 traded above its 200-day moving average, a key technical resistance level followed by market observers seemingly unconcerned by the cascading systemic effects of a global pandemic.

Moreover, the market has been conditioned by the notion that economic activity and employment will quickly rebound to reflect normalcy and this hope is surely well founded. Wall Street economists and strategists continue to telegraph this outlook, ignoring everything from rising COVID19 numbers across large swathes of the country to withdrawn earnings guidance by a majority of companies and even ongoing layoffs by leading firms across industries.

This sentiment was best captured by Michael Wilson, chief U.S. equity strategist at Morgan Stanley, who wrote, “We will see a V-shaped recovery for two reasons – the historic steepness of the decline in activity, and the unprecedented policy response.”

Hercules Investments respects Morgan Stanley’s optimism, they do not agree with their projection of a V shaped recovery because of the following risks:

The five largest stocks in the S&P 500 now account for 20% of its market capitalization, exceeding the 18% concentration level reached during the dot-com bubble. The dispersion in returns and the consequent rapid decline in market breadth is clear. 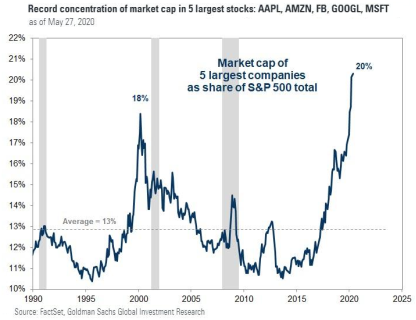 A growing dispersion in returns and narrowing breadth among stocks typically signals future periods of below-average market returns and eventually a reversal of upward market momentum. Validation from the past include the tech bubble, as well as periods ahead of the recessions in 1990 and 2008.

Recently, the COVID-19 induced recession has forced companies to limit capital spending. Refinitiv data (of nearly 4,000 firms) estimates 2020’s cut in spending will be on average 12%, higher than the 11.3% decline during the global financial crisis in 2008-09, or the largest in over a decade. For many companies and firms that experienced near-death situations due to the pandemic, cash flows will have dried up and they will be much more risk averse. Lower business expenditures are typically associated with slower recoveries and underwhelming revenue projections.

Companies may rehire fewer employees or at a slower pace than investors currently expect. In a stagnant economic environment, many firms are borrowing money to finance ongoing operations. Even with low interest rates, increasing corporate leverage will ultimately restrain the pace of recovery. Furthermore, companies are accelerating the trends of digitization, automation, and direct-to-consumer business moves that will hurt sections of the workforce that need jobs, the most.

There are several wildcards here that could skew economic outcome in either direction. While a successful antiviral therapeutic or a vaccine could save the day, a second wave of COVID-19 is currently sweeping the nation setting record highs. As with any vaccine, once proven successful it will take time to scale up production to necessary levels.

The tariff war between the US and China is rapidly escalating with China’s regulatory legislation over Hong Kong adding fuel. Based on exchanges between politicians on both sides, the situation seems likely to get worse on the margin. Greater geopolitical instability is typically associated with lower valuations.

The US Presidential Election

Perhaps the most significant risk and source of uncertainty is the US election, just five months away. Prediction markets currently assign a 78% probability the Democrats control the House of Representatives, a 61% likelihood of occupying the White House, and a 63% probability of controlling the Senate. The tax reform law passed in late 2017 lowered the median effective corporate tax rate (federal plus state) to 19% from 27%. If the tax law is reversed, it would translate into meaningful reduction to any forward EPS forecast.

The overwhelming facts on the ground make the question “to ‘V’ or not to ‘V’” a rhetorical one in the context of current equity market valuation. The market, at this point, has priced in a perfect return to trend growth for the US that will make us all believe this was all a bad dream and never look back on it.

Nonetheless, the seemingly endless power of the Federal Reserve is matched only by its resolve, and with a compliant Congress and Administration in tow, is never to be underestimated. Both have influenced the markets to the point of reasoning any and all wins.

The end of every financial cycle of a credit fueled global economy is inevitably marked by a flush-out of bad actors, as banks, in recognizing the downturn cease to fuel the largesse. Short of the Fed stepping in to directly support US equity markets, the latter will eventually reflect the state of economic unwind, as they always have in the past. Thus, buckle up, because a V shaped recovery is unlikely, and we will instead look at a bumpy rest of 2020.