You are here: Home / In Business / Mayor Tibshraeny Named Municipal Leader of the Year
In Business  |  Achievements  | 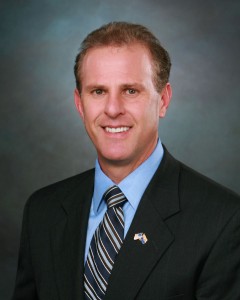 American City & County Magazine has selected Chandler Mayor Jay Tibshraeny as its Municipal Leader of the Year. Mayor Tibshraeny will be featured in the November edition of the magazine, which has been the voice of state and local government since 1909. The magazine serves city, county and state officials who are charged with developing and implementing government policy, programs and projects.

“Mayor Tibshraeny proves that through foresight and endurance, America’s local leaders can help overcome their community’s problems,” said Bill Wolpin, editor of American City & County Magazine. “His story is worth sharing in the hopes that others will become inspired.”

This honor is in large part due to Mayor Tibshraeny’s role in economic development and specifically, creating, protecting and preserving the Price Corridor.  The Price Corridor is Chandler’s major employment corridor and has been instrumental in attracting high wage technology jobs to the city.

Price Corridor is home to large corporations such as Intel, Bank of America, PayPal, Microchip Technologies, Orbital Sciences, Rogers Corporation and Wells Fargo. In the past year alone, General Motors, Infusionsoft and Nationstar opened in the Price Corridor.

“Chandler is a leader in the region in job creation and today the Price Corridor is home to an impressive roster of companies,” said Mayor Jay Tibshraeny. “This success validates our efforts to protect the area from residential encroachment. I am proud of what we have been able to accomplish in the area as Chandler is now recognized as a premier innovation and technology hub throughout the Southwest.”

In addition to his achievements with the Price Corridor, Mayor Tibshraeny is being recognized for a wide variety of accomplishments including; the Four Corner Initiative and Adaptive Reuse Program, creating a healthier community, neighborhood outreach, job creation and University partnerships and transparency through technology.