You are here: Home / In Business / Matthew Feeney Assumes Chairmanship of Snell & Wilmer
In Business  |  Positions  |

Matthew P. Feeney, a partner in the Phoenix office of Snell & Wilmer 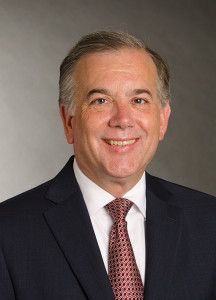 , has assumed the firm’s chairmanship. As announced in a press release on the impending change on October 21, 2014, Feeney takes over for John J. Bouma, who steps down from the position after leading the firm for more than 30 years. Bouma remains active in his practice and continues to serve on the firm’s executive and compensation committees.

“I am deeply honored to assume the chairmanship of Snell & Wilmer,” said Feeney. “During my 32 years with the firm, I have had the unique opportunity to work with wonderful clients and colleagues, as well as with community and business leaders. I am particularly grateful for John’s mentorship and friendship during this transition period and look forward to being his partner for many years to come. I am committed to working with my Snell & Wilmer colleagues as we plan for a very successful future, guided by our foundational values of service to our clients, to our communities, and to each other.”

Feeney has also been involved in numerous civic and charitable organizations. In addition to helping develop a formal pro bono policy for Snell & Wilmer in the late 1980s under which attorneys receive billable hour credit for legal services to the poor, Feeney is a founding board member and former chair of St. Joseph the Worker, an organization that provides job development services to assist homeless, low-income and other disadvantaged individuals. He also served as a board member and president of the Arizona Foundation for Legal Services & Education, which was created by the State Bar of Arizona to promote access to justice for all Arizonans. Feeney was also honored in 2014 by the American Jewish Committee with the Judge Learned Hand Community Service Award. He was recognized for demonstrating sustained contributions to the advancement of equality and democratic principles.  Feeney also serves on the board of directors of the Greater Phoenix Chamber of Commerce and the board of directors of the Musical Instrument Museum, the world’s only global musical instrument museum.