Marcia Rowley: Trading Up on Timeshares 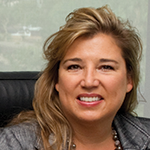 Co-founder, executive vice president and chief marketing officer of International Cruise & Excursions, Inc., Marcia Rowley took an idea based on common sense and turned it into a successful company that quickly grew to be the leader in the travel and leisure industry. At least, it seemed common sense to her, though she found it had never been done before.

Like millions of other people, Marcia and her husband John owned a timeshare. When she suggested trading use of their timeshare in Sedona in order to go on a cruise instead, she quickly found out that wasn’t an option.

“We knew that cruises had the same demographic as timeshares, and we figured there was pent up demand for this kind of trading,” Marcia Rowley says. “So about 15 years ago, we started International Cruise & Excursions, Inc. based on the idea of providing vacation owners this opportunity.” John Rowley, who had worked for several large technology firms, including Tektronix and Intel, applied his technology expertise to creating a unique platform that let people book their cruises easily, either through a booking agent or online.

After forming a strategic partnership with Carnival Cruise Lines, Marcia Rowley recalls, the idea of “barter for travel” took off immediately, and their company began to grow. By 1999, they had developed business relationships with every major cruise line in the industry. “Our technology powered us to broaden to other companies today. And John, with his technical background, helped develop the software in order for this to be an automated process,” she says.

As their company got busier and more successful, the Rowleys realized they could expand its offerings to other facets of travel. About five years ago they began to partner with large companies to help provide additional travel-based benefits. International Cruise & Excursions now works with leading financial institutions, retailers, government departments, hotels, airlines and more. “We help leverage the power of vacations, and deliver vacation benefits, working with companies like Marriott, Sears and others to provide travel in various forms and incentives,” Marcia Rowley says.

As she looks back to more than 15 years ago and how her short-term frustration with being unable to trade a time share for a cruise sparked an idea that led to the long-term success of International Cruise & Excursions, Rowley says she couldn’t feel any more fortunate. She is also proud that their company is responsible for bringing in a lot of revenue into the Phoenix metropolitan area. “When we do business, money from all over the world comes into the Valley,” she says. “We are actually helping to infuse capital into the area.”

Nine hundred of their employees work out of their Scottsdale office, and Rowley is proud of what she calls her “Google-like mentality” in terms of the many amenities, services and perks she and her husband offer their employees, which help build a family-like feeling in the office as well as attract and keep employees. “We have a hair salon on site, massages, a nurse, multiple lounges complete with Wii consoles and games, a cafeteria and concierge.”

International Cruise & Excursions now employs around 1,400 employees in eight different countries and is the worldwide industry leader for integrated cruise and leisure experiences. This year, Rowley says, the company will book more than one million travel transactions.