She gives clients more than just a ticketing platform 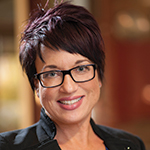 Mesa-based TicketForce is a force to be reckoned with. In 2012, the privately-held company sold $52 million in tickets in the U.S. and Canada. TicketForce is a business-to-business company that facilitates the sale of event tickets nationwide and in Canada. Locally, some of TicketForce’s clients include the Herberger Theater, Tempe Center for the Arts, Firebird Raceway and Celebrity Theatre. They’ve come a long way, tells co-founder and CEO Lynne King Smith, from selling tickets out of the home she and her husband, Brad, shared in Mesa.

“We had been leading this nonprofit and basically working out of the garage, and had gradually gotten more into ticket sales,” says King Smith, who at the time had a strong, working background in marketing “But I came home from work one day and they had set up an online store and they were selling tickets, and I knew it was the start of something big.” The online sales provided the impetus for the couple to take off on their own, separate from the nonprofit in 2002 and found TicketForce. Since its inception, the company has sold tickets in all 50 U.S. states.

King Smith has been traveling for work nearly constantly, she says. “It’s just something that the business seems to require right now. This next week, I’ll be spending quite a few days in Hawaii meeting with an existing client and also with a prospective client.” Because King Smith believes strongly in engaging one-on-one with her clients, travel does require a large chunk of her time. Along with garnering new business, King Smith often meets new clients to help them get up and running within the TicketForce model. Other times she travels with some of her 15 team members to help manage the on-site ticketing needs for large fairs and festivals.

“And I work all the time,” she says with a chuckle. “Even when I’m not working, my head is always churning — ideas, figures; it never quits.”

In the very beginning, the company’s most immediate struggles were related to cash flow. “It was all about finding the funding — through friends, loans; not all at the same time. But cash flow problems can put a lot of internal struggle on you,” she says. TicketForce came through its cash crunch with a series of creative and strategic loans, doubling its revenue every year the first five years with private funding and by offering cutting-edge ticketing software and following it up with superior customer care.

When TicketForce came into the marketplace 10 years ago, online ticket sales were not the commonplace medium they are today. Through specialized software, TicketForce was able to offer client services at a lower fee per ticket than its competitors, giving them an edge in the market. Combining that with a high level of customer support in the form of marketing is what gave TicketForce a true edge over the competition.

By offering marketing tools to their client base of thousands of venues, TicketForce ensures that its clients can utilize social media to its apex to obtain the greatest exposure for their events. It is King Smith’s background in marketing that took the company in this direction and gave it an edge over leading competitors.

And to that end, one of the company’s main means of exposure over the years has been trade shows, a place where venues, ticketing companies, food vendors, “everything you could ever imagine that would be event-related,” says King Smith, come together under one roof to exchange ideas, participate in workshops and forge business partnerships.

King Smith plays a pivotal role in these conferences held across the United States. With a degree in marketing, she’s taken the lead by teaching marketing and PR seminars at the conferences, coaching venue personnel on optimizing social media, blog operations and creating loyalty programs, a particularly valuable tool for venues to assure repeat customers and a devoted client base. For her depth of knowledge in the field, King Smith is often chosen to sit on panels and discussion forums at these massive conferences, an opportunity she particularly enjoys.

“It was a big struggle,” she says. “It was a different dynamic for us. Things would come up that I wanted to do differently and he had to relinquish the final say. It was tough. There was some friction in the beginning that made it really rough. I cut $80,000 from the trade show budget that year and he was not happy about that.”

Since 2010, the company has experienced tremendous growth in the U.S. and Canada. Says King Smith, “We made it through 2010 with no cuts in jobs or employees. And overall, through our business model, our practices, we’ve proven we can save our clients money in hard times.”

The Force Is with Them