You are here: Home / In Business / Leading and Elevating Arizona
In Business  |  Nonprofit  |  November 2014 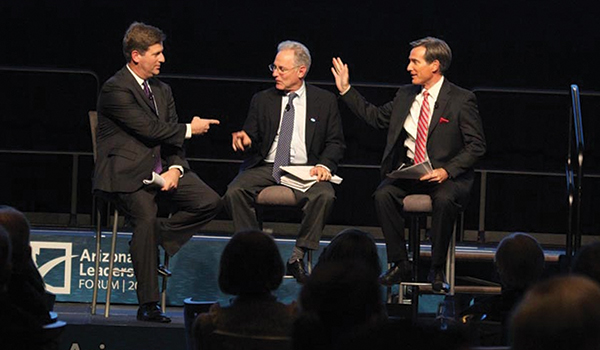 On Sept. 19, more than 600 of the state’s most influential leaders — nonprofit executive directors and board presidents, corporate CEOs and elected officials — convened at the Phoenix Convention Center to learn about some of Arizona’s recent successful public-private partnerships and discuss the critical role of leadership in the state’s future.

The third Arizona Leadership Forum, “Elevating Arizona: Transformational Leadership and Its Impact,” encouraged participants to commit to advancing the state’s goals using The Arizona We Want Citizens’ Agenda as a guide.

Originating from the Center for the Future of Arizona, the Agenda was developed by The Arizona We Want Institute, which, through a Gallup poll, identified eight citizens’ goals for the future of the state and organized them into three categories: caring for the economy, caring for people, caring for communities.

“Caring for the economy” goals: (1) Create quality jobs for all Arizonans and (2) prepare Arizonans of all ages for the 21st-century work force.

“Caring for people” goals: (3) Make Arizona “the place to be” for talented young people and (4) provide health insurance for all, with payment assistance for those who need it.

The Forum revealed just how much state leaders in all sectors have taken those goals to heart since the Agenda was defined. A host of local and national collaborations have resulted in job creation, greater workplace preparation for graduates and environmental achievements — to name a few. Take, for instance, ASU, which created an innovative tuition-reimbursement partnership with global giant Starbucks.

“These people are innovators,” said Starbucks Vice President of Strategy Dervala Hanley at the Forum, referring to ASU’s pioneering leadership. “And we really wanted to work with them. This is an organization that’s not scared to venture into the unknown. ASU is educating everyone, not just the world’s elite.”
In the Starbucks College Achievement Plan, full tuition reimbursement will be awarded to Starbucks student-employees nationwide who are enrolled in ASU Online

Another leadership highlight at the Forum came from the Translational Genomics Research Institute (TGen). The statewide bioscience initiative began in 2002 with more than 50 individual and organizational partners and has successfully established Arizona as a player in the rapidly emerging biotechnology industry.

TGen’s success is a direct result of the commitment of its many leaders. “Public-private investment has to be developed and encouraged,” said Martin Shultz, chair of Arizona’s Bioscience Roadmap Steering Committee. “With that investment, we’re going to be as successful in the next 20 years as we have been in the last 20 years.”

Kimber Lanning, founder and executive director of Local First Arizona, encouraged Arizonans to celebrate the state’s successes. “We’re doing amazing things in Arizona, and we need to tell the world.” She highlighted eMoney Pool, a startup that grew from Phoenix-based incubator Seed Spot. The online and Smartphone-based savings program allows the pooling of money within groups of individuals lacking proven credit history or who don’t qualify for traditional loans. Lanning also urged attendees to keep young leaders in the state by including them in discussions and incorporating their desire for vibrant city centers into planning decisions.

“It’s an asset to be an Arizonan because we value hard work and openness,” added Paul Luna, president and CEO of the Helios Education Foundation. Of the state’s cutting-edge collaborations, he said, “If you get involved, it shouldn’t matter who gets the credit. Do the right thing for the community — things that have a long-term, lasting legacy.”

This attitude, says Steve Seleznow,
president and CEO of the Arizona Community Foundation, is what will continue to propel Arizona and its leaders toward greatness. “As leaders, it is our job to confront hard questions and brutal facts, to take action for improvement and to seek greatness.”

What can Arizona nonprofits, corporations and individuals do to continue this forward momentum for Arizona? Become an AZ Advocate through The Arizona We Want Initiative. Simply sign up online and agree to support one of the eight citizen goals (above) and to promote it among constituents.

How does one empower ordinary people to lead and make big change? According to Seth Godin, keynote speaker and author of Tribes: We Need You to Lead Us, it’s all about connections. Real ones.

He says it’s about finding a group who will join with you and follow with you — finding your tribe, “the people who miss each other when they’re not in the room.” Tribal leaders don’t tell the members of their group what to do; they set the pace and rhythm of the tribe, encouraging synchronicity. The tribe, he says, shares a similar passion.

“It’s when we connect that we create value.” That’s when things start to happen. Organizations, nonprofits and government entities, says Godin, should “create for the people who care about what you’re doing.”

To generate transformational change in Arizona, Godin believes leaders must create a norm and embody that norm: People like us do things like this. Individuals and organizations can connect to like-minded people and lead by:

Godin stresses the importance of innovating, even if individuals and entities think they’re not ready.

“Many will say, ‘It’s too soon for me to launch my innovation!’” Yet Gutenberg launched the printing press when 96 percent of people were illiterate; and when AOL and CompuServ launched, the Internet was very sluggish. “Someone here is going to change Arizona,” Godin told the assembled leaders, “and that important work always shifts before it’s ready.”

The Arizona Leadership Forum and Initiative is supported by founding presenting sponsors The Phoenix Philanthropy Group, Freeport-McMoRan Foundation and National Bank of Arizona, along with many of the state’s leading corporate and civic organizations.