You are here: Home / In Business / Kimberly Davids Named General Manager of The Weitz Company
In Business  |  Positions  | 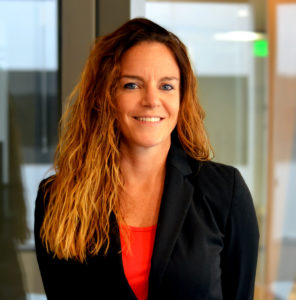 History was made at The Weitz Company on Thursday when Kimberly Davids was named the organization’s first female general manager. She will oversee Weitz’s operations in the southwest region from its office in Phoenix.

“Kim is a great communicator who will connect well with other Phoenix area leaders and with our employees here at Weitz,” Harrison said. “I have no doubt Kim will do whatever it takes to help make Weitz and our customers successful. She has a well-rounded background, which will serve her well in this new role.”

With 16 years of experience in the construction industry, including more than 10 in the Greater Phoenix area, Davids possesses knowledge and relationships that are difficult to replicate. Her ability to organize and lead projects (no matter how large or complex) has been widely recognized throughout her career in a variety roles such as superintendent, project manager or project executive.

Davids, who is a LEED accredited professional, has also been engaged and influential within a number of industry organizations. None more so than the Arizona Builders Alliance (ABA) in which she has served on multiple committees, volunteers as a training instructor and is currently the vice chair of the Leadership Development Forum Alumni Board.

“Kim has played a vital role the past few years in many of the ABA’s successes, including the development and establishment of our Young Builders Council, as well as the Leadership Development Forum Alumni group,” said ABA President Mark Minter. “When she commits to an undertaking, she puts everything she has into making sure whatever it is becomes not just viable, but very successful. She is a force in the industry who will continue to knock the ball out of the park.”

A tenacious work ethic and passion for improving have been evident since Davids joined The Weitz Company in July 2015. She quickly assimilated herself to the company, supporting its Lean construction philosophy and accepting opportunities to strengthen her skill set. The full range of Davids’ capabilities became evident in the past 12 months when she oversaw one of the most difficult projects Weitz has built in recent history.

Bottom line, what routinely stood out about Davids and significantly factored into this milestone achievement were her demonstrated leadership qualities and consistent pursuit of excellence.

“I’ve seen Kim’s drive and persistence in action first-hand over the last two years and know that she will bring a personal commitment to doing whatever it takes to make our Southwest business unit successful,” said Kevin McClain, chief operating officer of The Weitz Company. “She will have a positive impact on our customers, our team and the community through her great communication skills and commitment to doing what is right for everyone. I’m excited to see our office grow through her leadership.”