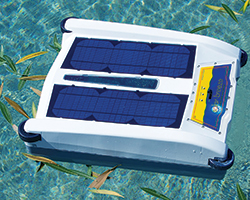 Solar Pool Technologies turned to Kickstarter not to launch a new business but, based on interest expressed by existing customers, to launch a new version of its solar-powered, robotic swimming pool cleaner and chemical dispenser Solar-Breeze. “It’s really hard for early-stage companies to secure capital to grow their business,” observes CEO Paul Sim. So last July, with a new product on the boards — encouraged by existing customers and incorporating design feedback from them — the company launched its Kickstarter campaign. “Within 24 hours, we had pre-sold about 200 units — between $120,000 and $150,000.” This was enough capital to finish engineering the design and to pay suppliers to get the product into production, Sim relates. Improvements are internal, focused on performance and durability.

According to Sim, 30–40 percent of the new orders are from the company’s existing customer base, but the company also expanded its customer base as a result of the Kickstarter campaign. “We’ve built 2,400 units this season — all of them were pre-sold, so we were able to recycle the funds and put another 1,200 units in production.”

The Tempe-based company sources many of its electronic components from overseas, and currently assembles overseas. But Sim says the company plans to evaluate “what makes sense regarding manufacturing in the future.” He notes that, because the product is so seasonal, “shipping time associated with building overseas presents a challenge.” Customers are not just in the U.S. “sun belt” but are in 44 states plus 18 countries. “I didn’t know there were so many pools in Norway,” Sims shares, also naming other countries that span the globe from France to Australia and Canada to Singapore.

Sim believes there will be demand next year for 8,000-10,000 units, which will again require ongoing working capital. “So we’re considering doing another crowdfunding campaign — focused on an equity raise.”