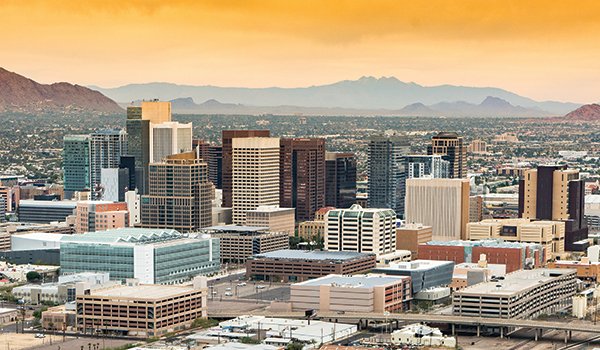 With excessive sales jobs cluttering the job market in Phoenix, fresh tech talent is moving away from Phoenix in search for more promising positions. Over 2017, Phoenix can expect big companies to move into the region seeking its business-friendly, affordable environment. However, rather than bringing in favorable opportunities for fresh tech talent, more back-office jobs in sales, customer service and call centers will be seen on the market.

While articles, such as one from the New York Times and Bizjournals, have painted Phoenix as a rapidly emerging tech hub with greater living affordability than Silicon Valley, the state is struggling to keep hold of talent from local universities to fill even the most menial of roles. On top of that, existing startups complain of the lack of funding and mentorship opportunities that are forcing them to move elsewhere.

With no real opportunities, tech workers are moving away from the area, leaving behind nothing more than back-office jobs on the market. Robert Backie, CEO of SmartClinic, a local medtech company offering a smartphone app that provides information on patients’ medical progress, says, “Jobs are great for the community, but outsourcing low-cost jobs from other areas does not make us a tech hub. Silicon Valley was not built from outsourced jobs but rather from the ground up, starting with Fairchild Semiconductor in the 1950s. To be a tech hub, we need to follow the Silicon Valley model by starting companies locally that grow and succeed, reinvesting cash and tech talent back into Arizona.”

So how can Phoenix stop this vicious cycle to move past ordinary sales jobs and provide greater innovative tech opportunities?

What Is the Problem?

Despite cities across the country increasing their efforts to retain college students over the last decade, Phoenix still holds the record for the lowest retention rate of students throughout the country, with just 36.3 percent of graduates from two-year colleges remaining after they graduate. The figure is even worse with four-year colleges, where only 18 percent of students choose to stay.

With such a high percentage of graduating students moving out of Phoenix, large corporate companies are crying out for tech talent. Justine Gray, CEO of Arizona-based marketing company LeadMD, says, “When I started my agency in 2009, it was impossible to find local talent. In the last eight years, little has changed. Now that we are launching a software platform, we feel the pain even more as, one by one, local talent falls to the allure of areas like San Francisco, Seattle and Austin. Last year, we spent over $100,000 relocating talent to Arizona due to the lack of local expertise.”

On the other hand, Bodetree, a small tech company specializing in business data analytics, left Phoenix for “less isolated” Denver in search of more technical support for its business. After years battling on home turf, it struggled to find experienced mentors to help the company grow and felt it was being held back by a lack developer talent.

And, while other startups battle on and big names move in, the quality of jobs being offered simply doesn’t meet the standards of ambitious, self-empowered millennial talent. While leading names like Uber and Yelp might be setting up shop here, it’s not with exciting innovation labs and research facilities, but instead with large numbers of sales and customer service jobs. These customer-support positions are failing to catch the eyes of ambitious millennials, who have no problem going further afield in search of something a bit more exciting. After all, Silicon Valley is only 90 minutes away.

One solution is to promote current opportunities. Phoenix has created generous opportunities for startup initiatives, yet the rest of the world appears to know little about their existence. In February this year, Phoenix held an inaugural keystone event, Street Pitch, at which 10 startups pitched their business to a panel of judges for a chance at a $50,000 investment from the Arizona Founders Fund. This is just one example of many startup events and organizations like PHX Startup Week, BioAccel and Coplex Ventures that are supporting technology startups and the growth of Arizona’s small-business ecosystem.

However, while some of these initiatives have been around for years, more needs to be done to move the needle and retain tech talent in the area. Community-owned #yesphx creates a forum to motivate and encourage the Phoenix community to take pride in the city and build a greater startup society. Similarly, Arizona Technology Council’s startup and entrepreneurship committee works to connect and engage technology companies operating within the State of Arizona through educational seminars, mentoring sessions and networking events.

With so many favorable initiatives in place in Phoenix, it comes as a surprise that fresh talent is not given the opportunities needed to develop in Phoenix. Justin Talbot-Stern, CEO of management software company B2Gnow, has seen firsthand the numerous examples of real creative and ground-breaking tech opportunities that are not often recognized or reported. “What the media reports is ‘big news of small wins.’ A ‘tech company’ opening a call center in Phoenix is not ‘tech news’; it’s boring news. It dampens enthusiasm for investment in Arizona startups because we get labeled as a service industry, not an inventor industry. By dressing it up as a ‘tech win’ (which it is not), it captures clicks but does our community a disservice by reinforcing the notion that Phoenix is a low-cost service center in the desert.”

Marketing specifically to tech talent entering the workforce will create greater energy and enthusiasm in the field and fuel the business tech hub in Phoenix.

Another solution is to support local industries. More niche industries such as cyber security, edtech and medtech are prospering in Phoenix. By controlling the job market and analyzing the insights into the latest trends, these industries create networking possibilities within the Arizona community. Phoenix provides both government, university-based and industrial opportunities. CyberSecurity, for example, aims to attract and retain cyber talent in Arizona by working closely with local universities, advertising jobs in local media, providing learning and training options for employee growth, and widely promoting the benefits of working in the cyber sector in Arizona. Institutions such as Draper University, a provider for Silicon Valley entrepreneurship programs, has recently begun creating a four-month program for entrepreneurs in partnership with the “most innovative” college in the country, Arizona State University.

By highlighting the industries that are growing naturally in strength within their micro-ecosystem, local authorities and startup organizations can create accelerators, meetups and events, which will bring in greater opportunities for tech talent.

Much is happening in the Phoenix tech scene. However, according to the Deloitte Millennial Study 2016, what truly motivates recent graduates is an authentic sense of purpose. An environment where employees can grow their own skills and feel like they are making a difference, which can start with internships and learning opportunities and develop into opportunities for each to foster his or her own ideas and create his or her own projects, would both attract and retain talent to help grow the tech ecosystem in Phoenix.

In order to attract young talent, what a company really needs to do is create working environments that appeal to the employee’s aspirations. This means offering internships, learning opportunities, perks and exchanges to make it appealing for young people to stay rather than move away. Once an entrepreneur is in the business, that person needs need to be able to foster his or her own ideas, create his or her own projects and become an active player in the company and tech community by giving back through time, talent and resources.

[Editor’s Note: This in-depth look at the technology sector accompanies the main cover story, “Where Is Our Educated Talent?”]

Stephen Viramontes is a tech entrepreneur with experience in tech education and workforce development. He’s also a leader in the local tech and startup community.