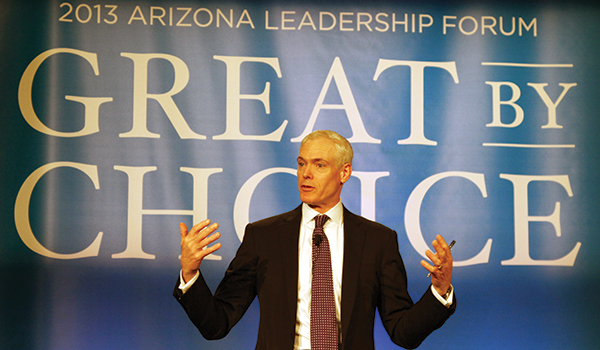 It starts with people. That is a basic tenet of Jim Collins’ teachings on how to effect greatness in an organization, and central to one of the challenges he gave to the assembled leaders at the Arizona Leadership Forum earlier this year. A foremost authority on leadership and author of New York Times bestseller Great by Choice, he urged everyone there to reach out to like-minded people to join their passions to the efforts to create stronger leadership and social cohesion.

And looking ahead to next year, Collins also issued a challenge to identify the 20 most respected and influential political leaders in the state and make sure they attend the next forum. He stressed this should be as participants, not as speakers. He indicated that he wanted to be informed of the outcome of those efforts.

What Arizona is doing, he said, is something he has never seen another state do. In his closing speech, he said, “You have something very interesting that can be happening here. This could become one of the wonderful inflection points stories in our country and one where other people would study you to sort of figure out how this happened.”

His keynote speech, in many ways, crystalized the strategies that had already been set in motion — that the Forum was, in fact, part of — and inspired further action, as described in other articles in this Arizona Leadership Forum special section.

Collins teaches the importance of disciplined people practicing disciplined thought driving disciplined action. The impetus for the Forum lay in the recognition that nonprofits — the organizations often closest to the social issues confronting our communities — have not been involved in the leadership addressing those issues. When a Gallup Poll was released that showed only 10 percent of the population throughout the state felt we had the leadership we needed, National Bank of Arizona spearheaded a joint effort with Freeport-McMoRan Copper & Gold and The Phoenix Philanthropy Group to convene a gathering of nonprofit leaders and board chairs — which evolved several months later to the Arizona Leadership Forum, adding leaders of for-profit organizations to the movement. Bringing political leaders to the next Forum follows Collins’ belief in building momentum. It was the challenge he called our “Big Hairy Audacious Goal.”

The Forum is part of a broader effort involving co-founding sponsors National Bank of Arizona and Freeport-McMoRan Copper & Gold working with The Phoenix Philanthropy Group: Arizona Nonprofit Leadership Initiative. The Initiative includes an online portal that allows nonprofits to share best practices; a communication plan to inform people about what’s going on in the nonprofit sector; and an economic vitality study to measure the economic impact of the activities and services the nonprofit sector provides, such as after-school care that enables the parents to hold a job. As Forum panelist Rufus Glasper, chancellor of Maricopa Community Colleges, noted, although there is a lot of individual activity around the state, “until we raise all boats, we won’t get the results we want.”

These, then, are what comprise the “Flywheel” of Collins’ key concepts — small initiatives that build to a cumulative effect. He pointed to the importance of considering not only what would be “clicks on the flywheel,” but how to know if we are getting better.

Another challenge Collins issued was to find the root cause, a necessary step to being able to bring about systemic change. This requires embracing another of Collins’ basic tenets: It is critical to confront the brutal facts.

Greatness is not a function of good or bad circumstance, according to Collins. It is a function of choice and discipline. Facing the brutal facts and acknowledging the truth of the situation is a first step in dealing with that situation.

Arizona must embody what Collins has named the Stockdale Paradox — retain the faith that we can prevail to greatness in the end, while retaining the discipline to confront the brutal facts of our current reality. He named this belief structure after Admiral James B. Stockdale, who had described to Collins how he had survived being a prisoner of war for several years — he kept an underlying faith that he would one day be free, but avoided setting himself up for repeated disappointment in tying that belief to a hoped-for calendar date. However long it took, he kept his mind on the image that it would ultimately happen.

Collins iterated a triangle whose three points, taken together, define a complete person: success, growth (he noted that growth, not failure, is the opposite of success) and service. He directed a third challenge to Arizona: to have an objective for each of those points on the triangle.

The best leaders, Collins said, are those who combine humility with a strong will. They push toward a greatness for the cause — whether a business organization or a social issue — rather than for themselves. It is leadership in the service of a mission rather than personal aggrandizement that defines greatness and what he classifies Level 5 leaders.

Underscoring Collins’ studies on leadership is the idea of determining what is empirically working, and then utilizing strategies to make that work on a bigger scale. His final challenge to the Arizona Leadership Forum participants was to build on the work done in the Center for the Future of Arizona’s report “The Arizona We Want 2.0.” He challenged each person to pick one of the eight identified areas — education, job creation, environment, infrastructure, healthcare, young talent, civic engagement and community involvement — and assess how he or she spends time and what kinds of clicks he or she creates on the “flywheel.” But his message circled back to, whatever our personal “hedgehog” to which we devote passionate energy and at which we feel we can be best in the world, the first task is “who” — who are the best people to get on board with us or for us to get on board with to further the effort. Each person should find three people who are capable and respected but who are not yet engaged and recruit them for the brutal fact he or she wants to address, and charge each of them with recruiting three more. That, he said, is how to create change.