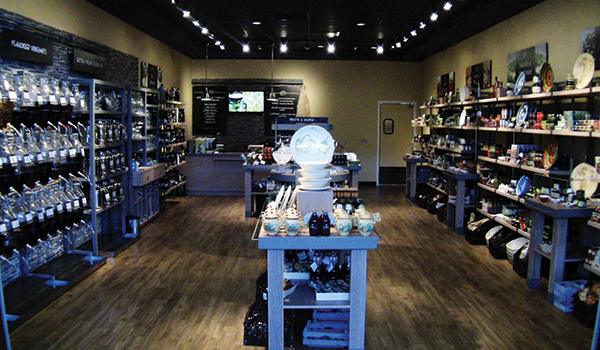 Less than a year after opening their first Arizona store of the international Oil & Vinegar franchise in Scottsdale, Jessica and Mike Winn opened their second in Chandler this past October. They relocated to the Valley two years ago after buying the franchise rights to the entire state — a decision based on their experience as owners of an Oil & Vinegar franchise in Spokane, Wash. “The No. 1 region we shipped to is here [in Arizona],” Mike says. They moved on their decision quickly because “we saw a growing interest in the Arizona market.” They anticipate opening at least five stores throughout the state in the next seven years, and Mike says they are getting positive interest from property owners. “It adds a different flavor to the assortment [of stores] they can offer consumers,” he says.

The store answers what the Winns see as a growing consumer demand for “foodie” shops, and offers more than 400 products that range from rubs and dried herbs to honey, sauces and pasta, along with ceramics and cookware. There are 40-55 oils and vinegars on tap, with an assortment of bottle sizes and shapes customers can purchase to use and reuse. Prices are competitive as Oil & Vinegar buys directly from the producer, cutting out the middleman, notes Mike, adding that the direct-buy arrangement supports a lot of small, local estates such as a South African farmer who makes rubs and sauces from peppers and vegetables grown on his property. “It’s nice to be able to support individual, small, family operations,” Mike says, explaining that individual franchisees are on the lookout for high-quality new products they can bring to the attention of the corporate office.