In the Wake of Guy Fieri

“As seen on TV” is a phrase that often goes with a “wink, wink” and less than positive expectations. Not so with restaurants showcased on “Diners, Drive-Ins & Dives,” where the attraction is not just the celebrity of having been on TV, but is, first, the food that got them there. Here are three in Metro Phoenix that rated a visit from traveling gourmand Guy Fieri.

GIUSEPPE’S ON 28TH
Richard Bock opened his Italian restaurant when he was still first cellist with the Phoenix Symphony – quite a stretch for a nice Jewish boy from New York. “They’re both performance,” he says casually, explaining the connection.
2824 E. Indian School Rd., Phoenix 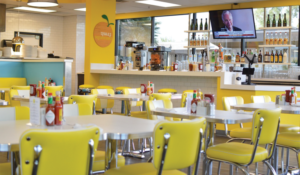 OVER EASY
From his first location in a repurposed Taco Bell in a mostly residential neighborhood in Arcadia, founder and current executive chef Aaron May has seen his breakfastand-lunch concept expand to include franchise locations throughout the Valley and beyond.
Multiple locations

REPÚBLICA EMPANADA
Comfort food, South American style — which encompasses a wide range of Latin American regions and tastes. Empanadas, of course, cover the bulk of the menu — for both entrées and desserts.
204 E. 1st Ave., Mesa