You are here: Home / In Business / In a Time of Uncertainty, Understanding Risk Is Essential to Business Survival
In Business  |  Feature  |

In a Time of Uncertainty, Understanding Risk Is Essential to Business Survival

Today, more than ever, business leaders and entrepreneurs are functioning in a world that is full of uncertainty. These executives need to clearly understand the difference between what is certain and what is not, in order to identify which risks are worth taking and which to avoid.

Many years ago, when I started my own Phoenix-based real estate company, I took on millions of dollars in personally guaranteed debt and staked my young family’s future on the success of my enterprise. At that time, through experience, I had become confident in my ability to take, manage and mitigate risks. I was less worried about having my future be in my own hands than I was having it in the hands of someone else.

In other words, a good risk-taker knows what is — and is not — a certainty. Among the many uncertainties of business are the stock market, interest rates, governmental actions, natural disasters, commodities prices — and other people’s thoughts and actions.  Once one has a handle on all of the uncertain things that might happen, one can create a plan to deal with the worst-case scenarios.  The question to ask is, “What’s the worst that can happen if you take this risk and it doesn’t work out?”  If the worst-case scenario is becoming financially ruined, then it’s not a risk worth taking.  If, on the other hand, the worst-case scenario is suffering a tolerable loss but a gain is a much likelier outcome, then it’s probably a risk worth taking.

Warren Buffet has said, “Be fearful when others are greedy, and be greedy when others are fearful.”  Buffet’s advice may sound like stubborn contrarianism, but it is absolutely sound.  For example, when the Phoenix housing market crashed in 2008, shrewd local and national investors came in and quietly bought thousands of houses, some for as little as $30,000, and leased them to people who were afraid to buy. Five years later, these investors were able to sell these houses for big gains and were richly rewarded for their risk.  Why did they think this would be a good investment, and did they measure their risks?  Here’s a review of four proven business principles that will help make the next big decision less risky.

Before buying in to a risky venture, it’s important to do the homework to uncover all the possible things that could go wrong. Doing this ensures being better prepared to understand and deal with any adversity that comes along.

To understand the concept of “margin of safety,” the questions to ask is, “What do you stand to lose, and how much is safe?” Someone playing blackjack in Las Vegas who puts $100 on the table, stands to lose it all; in that case, the margin of safety is zero. Someone investing in a stock has a safety margin of, probably, in the 80 percent range, and it gets much better the longer it’s held.

When the housing market in Phoenix crashed and prices dropped more than 50 percent, shrewd investors quietly bought thousands of houses, some for as little as $30,000, and leased them to people who were afraid to buy. Five years later, these investors were able to sell these houses for big gains.  Why did they take this risk?  When they looked at the bet they were taking, they could see that prices had already fallen well below replacement costs and couldn’t fall much more. And if they did, it would probably be less than 20 percent, so their margin of safety was at least 80 percent.

Because they could easily cover their holding costs by renting the homes until the market recovered, and their margin of safety was 80 percent, they could see that this was a very safe risk, and they capitalized on the opportunity.

Probably the most basic way to look at risk is with the “return on investment” or ROI principle. In financial markets, the expected returns are based on the perceived risks in each investment category. For example, the expected annual returns for 5- to 10-year bonds are in the 3-percent range, while the expected annual returns for most stocks are in the 6- to 8-percent range, as they are more volatile. The point here is that the return must be relative to the risk. The bigger the risk, the bigger the return should be, and the potential benefits must exceed the potential costs.

As a partner with Trammell Crow Residential in the 1980s, we had a very simple way of managing risk. We knew that if things went badly, we would lose 100 percent of our investment. So to justify this risk we tried to achieve at least ten times our investment. This was a high mark that we rarely hit, but it helped us stay out of trouble.

The higher the Sharpe ratio, the more return investors can expect to receive in return for the extra volatility they are exposed to. The Sharpe ratio message is clear: Change, uncertainty and volatility will provide opportunities for taking smart risks that earn higher returns.

You can’t go run a business without taking risks.  Be the leader who strives, who takes smart risks, and gives it your all. And when you lose, as you sometimes will, get right back up and into the arena. That’s the key to being a successful business owner or entrepreneur. 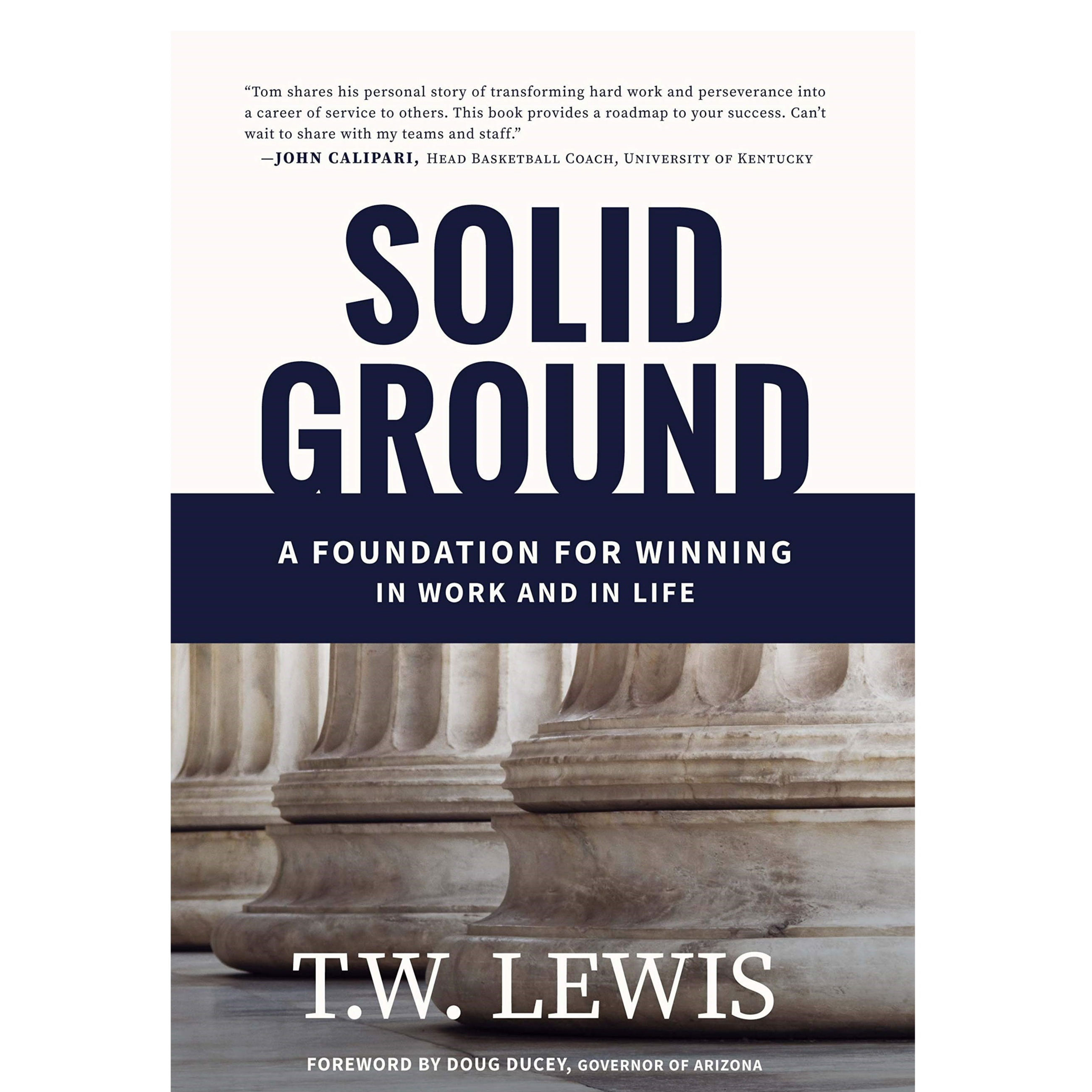 T.W. Lewis, author of Solid Ground, is the founder of T.W. Lewis Company, an award-winning Scottsdale, Arizona-based real estate and investment company known for its quality and outstanding customer service. He is a graduate of the University of Kentucky and received his MBA from the University of North Carolina. Lewis received a Lifetime Achievement Award from Professional Builder Magazine and was the first inductee into the National Housing Quality Hall of Fame.  In 2002, Lewis and his wife Jan formed T.W. Lewis Foundation to support higher education, children and families in need, youth character education and a variety of local and national non-profits that strengthen Americas’ civil society.  In 2015, they created the Lewis Honors College at the University of Kentucky, and in 2019, they established the T.W. Lewis Center for Personal Development at Arizona State University’s Barrett Honors College.