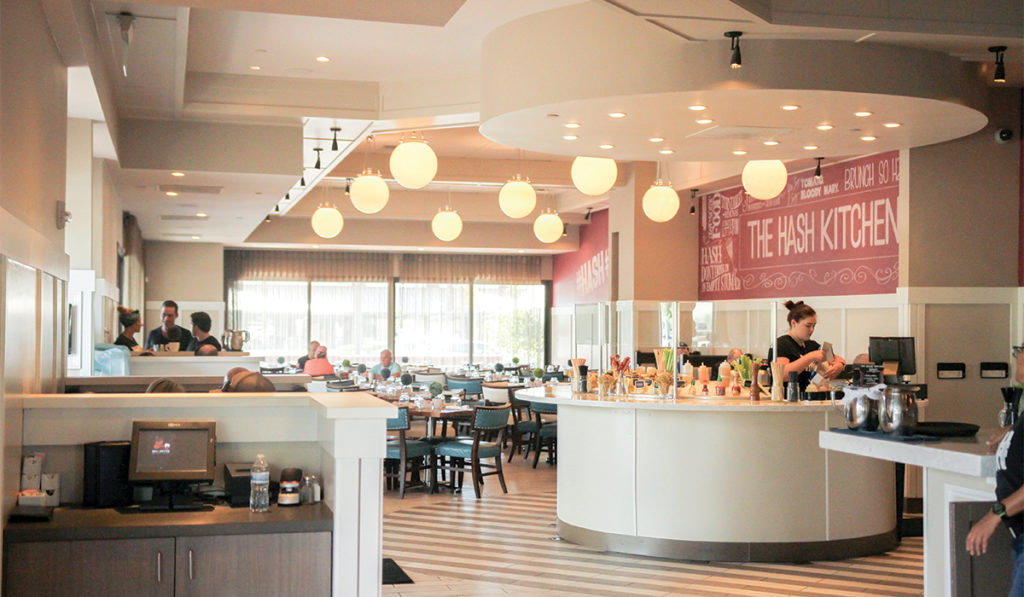 Very open and friendly, Hash Kitchen goes in for simplicity in its décor. Simplicity and comfort. Tables are widely spaced and booths allow leg room. Patios vary in size with location, but the outdoor seating option is available at all the restaurants. 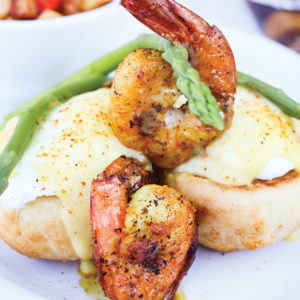 The new design puts more emphasis on the restaurant’s Bloody Mary offerings. Its newest location, opened last month in Chandler, makes the Bloody Mary bar a focal area of the interior design. And it certainly deserves it, given the extensive selection of fixin’s patrons can use to customize their drink to taste. Older locations will be getting a makeover to match.

The breakfast/lunch menu is where creativity really stands out. There’s the Jumbo Shrimp & Sweet Potato Hash, with blackened shrimp that live up to their billing served in a bed of soft-cooked shredded sweet potatoes and topped with a poached egg, served with Hollandaise Sauce on the side. The other namesake HK hashes are built on the more usual hash-browned white potatoes. There’s Southwest influence in the Huevos Ranchero Hash, made with black beans, crispy hashed potatoes, cotija cheese, crispy tortillas, fried eggs, avocado, cilantro, charred carne asada and a red chili sauce. And the restaurateur known for Tomaso’s includes Mediterranean influence in dishes such as Paella Hash, made with caramelized onions, jumbo shrimp, chicken, sausage, potatoes, manchego cheese, saffron hollandaise and fried onions.

Specialties of the house range from dessert-worthy French toasts – Banana Split Brioche, S’Mores — and French Toast Bread Pudding to Flat Iron Steak & Eggs. An assortment of eggs Benedict includes the Smoked Salmon Eggs Benedict, with Hollandaise sauce over roasted tomatoes, sautéed spinach, crispy capers and smoked salmon that’s fresh (if we can say that about a smoke fish) and tasty. There’s Herb Fried Chicken & Waffle on the menu as well.

While the emphasis is on breakfast dishes, there’s also a nice variety of usual and unusual salads, sandwich and burgers, such as the Blackened Shrimp Loui salad made with butter lettuce, grape tomatoes, avocado, cucumber, hard-boiled eggs and chili mayo; the SBLT made with mesquite-smoked salmon, bacon, tomato, Bibb lettuce and a spicy remoulade; and a no-meat Quinoa Burger.

Locations now cover the central Valley north to south, and the fast service also makes this a convenient choice for a “power lunch.”